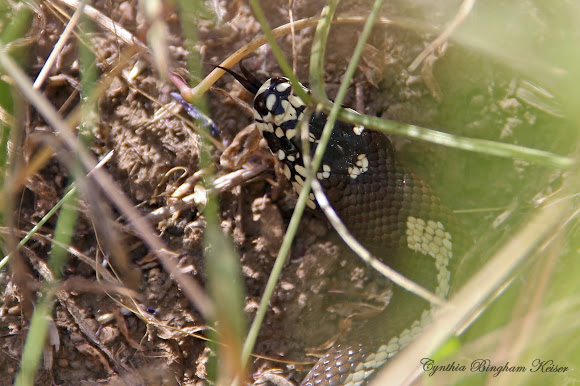 This snake is striped rather than the typical banded appearance. It quickly retreated further up the hill in the grass when it saw/smelled me. "Smooth, shiny, unkeeled scales. The head is barely wider than the neck. Highly variable in appearance. Most commonly seen with alternating bands of black or brown and white or light yellow, including the underside, where the light bands become wider. A striped phase with a white or light yellow stripe on the back occurs in coastal southern California." - CaliforniaHerps

Grassy hillside along trail in mixed chaparral. "Found in a wide variety of habitats - forest, woodland, chaparral, grassland, marshes, farmland, ranches, deserts, and even brushy suburban areas. Found throughout California, except the damp redwood zone of the extreme northwest coast, and the northeast corner. Absent from high elevations in the Sierras, the Trinity Alps, and the Cascades." - California Herps

"Common food items include rodents, other reptiles, birds, and amphibians. All kingsnakes are non-venomous, but are powerful constrictors and generally kill their prey through suffocation. The "king" in their name refers to their propensity to hunt and consume other snakes, including venomous rattlesnakes." - Wikipedia