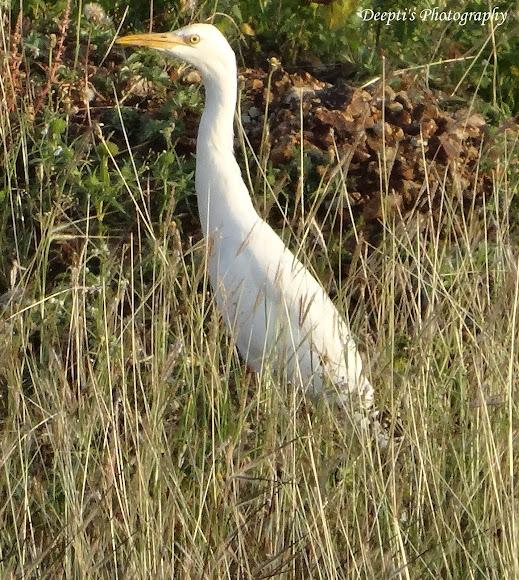 It is a white bird adorned with buff plumes in the breeding season. It nests in colonies, usually near bodies of water and often with other wading birds. The nest is a platform of sticks in trees or shrubs. Cattle egrets exploit drier and open habitats more than other heron species. Their feeding habitats include seasonally inundated grasslands, pastures, farmlands, wetlands and rice paddies. They often accompany cattle or other large mammals, catching insect and small vertebrate prey disturbed by these animals.

The positioning of the egret's eyes allows for binocular vision during feeding, and physiological studies suggest that the species may be capable of crepuscular or nocturnal activity. Adapted to foraging on land, they have lost the ability possessed by their wetland relatives to accurately correct for light refraction by water. The cattle egret is a stocky heron with an 88–96 cm wingspan; it is 46–56 cm long. It has a relatively short thick neck, a sturdy bill, and a hunched posture. The non-breeding adult has mainly white plumage, a yellow bill and greyish-yellow legs. During the breeding season, adults of the nominate western subspecies develop orange-buff plumes on the back, breast and crown, and the bill, legs and irises become bright red for a brief period prior to pairing. The sexes are similar, but the male is marginally larger and has slightly longer breeding plumes than the female; juvenile birds lack coloured plumes and have a black bill.