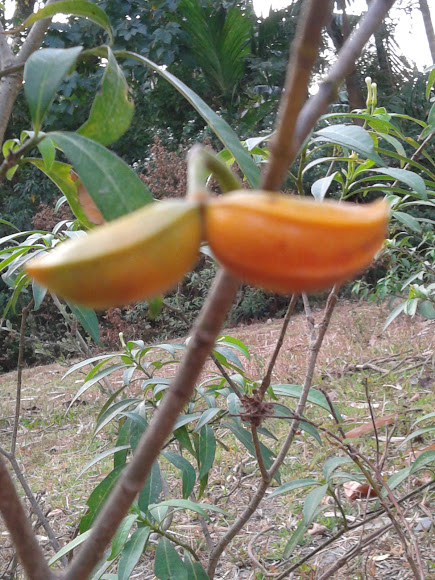 Its a shrub. Its fruit with a sticky, gooey, juice and also its sap. I tried to stick the fire ant's appendages and partially its thorax, right to the tip where I squeeze some tiny amount of juice; the experiment ends in the ant's escape after about thirty minutes, probably because the juice, as being exposed to air, dries out, but the ant had difficulty in moving afterwards because of the cement-like perception on him. I don't know if it's poisonous. I actually retrieved some seeds from the fruit and planted them (it's much larger than the mustard seed), until one of them grew into another one, and its first flower, with my observation, seemed so simple and small, having five petals. Until now, I failed to identify what species are these plants. Will you please help me identify this one or this one might not be in the records of taxonomy yet?

Near the fields in our province, but in a dense thick vegetation, particularly surrounded with large trees