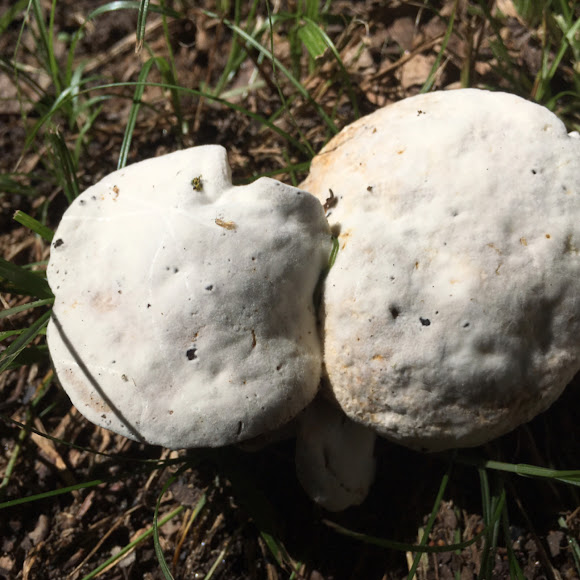 The cap is generally 6–10 cm (2.5–4 in) in diameter, though can reach 15 cm (6 in). It is initially convex, with some young specimens having a squarish shape, though flattening with age. It is whitish, with light brown tints towards the centre. The cap is dry and smooth, but can be scaly when old. The gills of this mushroom progress from pale-pink to a chocolate color. The spore print is brown. Its white stipe is bulbous with a skirt-like ring. Microscopically, the cheilocystidia are club-shaped. The spores are 6-7×3-4 µm. The main identifying feature is an immediate bright yellow colouration on cutting through the base of the stem, or scraping the flesh; later, the affected area fades to a dull brown. Numerous edible Agaricusspecies, such as A. augustus, A. arvensis and A. silvicola, turn yellow to a greater or lesser extent, but they do not display such an intense reaction. Agaricus xanthodermus has an unpleasant characteristic smell, which is phenolic, reminiscent of ink or carbolic soap. The smell is especially strong at the base of the stem.

This mushroom is very common and widely distributed in North America, Europe, West Asia including eastern Anatolia and Iran, North Africa, and southern Africa. It has been introduced into Australia. It occurs in woods, lawns, gardens and hedgerows in autumn. This is a saprobic species.