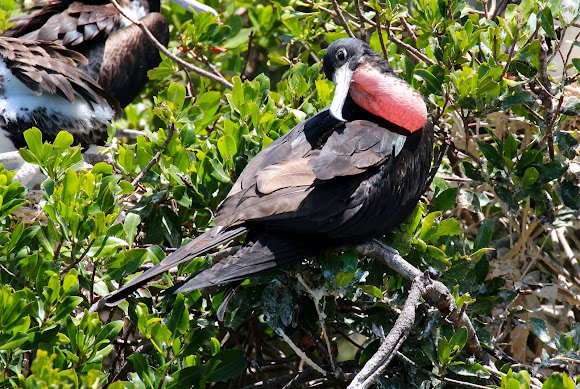 Frigate Birds: male (red-colored pouch) in photo 1, chicks in photo 2, female (white underbelly) in photo 3, a juvenile (all black) and chicks in photo 4 They have long wings, tails, and bills and the males have a red gular pouch that is inflated during the breeding season to attract a mate. Their plumage is predominantly black. Frigate Birds generally lay one white egg per clutch. Both parents take turns feeding for the first three months but then only the mother feeds the young for another eight months. It takes so long to rear a chick that frigatebirds cannot breed every year. It is typical to see juveniles as big as their parents waiting to be fed. Adult Frigate Birds' wingspan can reach 7 feet (picture 5).

Spotted at the Frigate Bird Sanctuary in Barbuda, located in the Codrington Lagoon. There are an estimated 20,000 Frigate Birds at the Sanctuary. The nests are on low mangrove trees.