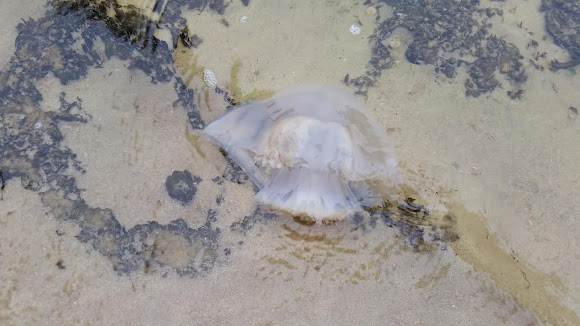 The cannonball jellyfish (Stomolophus meleagris), also known as the cabbage head jellyfish, is a species of jellyfish in the family Stomolophidae. Its common name derives from its similarity to a cannonball in shape and size. Its dome-shaped bell can reach 25 cm (10 inches) in diameter and the rim is sometimes colored with brown pigment. Underneath of the body is a cluster of oral arms that extend out around the mouth. These arms function as a way of propulsion and aid in catching prey.[2] Cannonballs are prominent from North America's eastern seaboard all the way to Brazil, but are also found in parts of the Pacific.

Cannonballs live in warm, estuarian waters, with an average temperature of 23.1 °C (73.6 °F) and average salinities of 33.8 ppt (parts per thousand).[3] They have been found in the northwest and east-central Pacific Ocean (South China Sea to Sea of Japan, and California to Ecuador) and the mid-west Atlantic Ocean (New England to Brazil).[4] They are common on the southeastern coast of the United States, including the Gulf Coast. On the southeast coast they are extremely abundant in the fall and summer months. During these months, cannonballs make up over 16% of the biomass in the shallow inshore areas.[5]