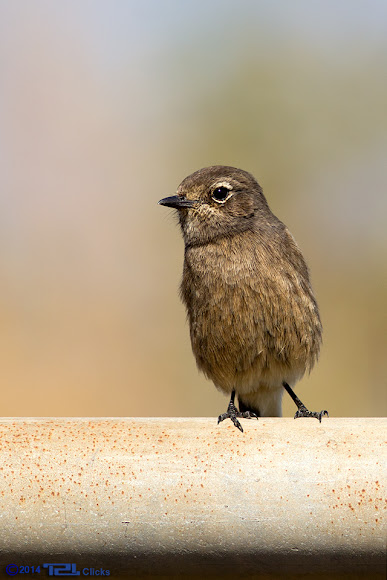 The pied bush chat (Saxicola caprata) is a small passerine bird found ranging from West Asia and Central Asia to the Indian subcontinent and Southeast Asia. About sixteen subspecies are recognized through its wide range with many island forms. It is a familiar bird of countryside and open scrub or grassland where it is found perched at the top of short thorn trees or other shrubs, looking out for insect prey. They pick up insects mainly from the ground, and were, like other chats, placed in the thrush family Turdidae, but are now considered as Old World flycatchers.

The pied bush chat is slightly smaller than the Siberian stonechat, Saxicola maurus, although it has a similar dumpy structure and upright stance. The male is black except for a white rump, wing patch and lower belly. The iris is dark brown, the bill and legs black. The female is drab brown and slightly streaked. Juveniles have a scaly appearance on the underside but dark above like the females.

My guess is a young female Pied Bushchat.

Hi PramodCL, take a look at this one I just posted http://www.projectnoah.org/spottings/112... and you will see the similarity to yours. You have several species of Stonechat and Bushchat there which are all similar. The white eye ring rules out Grey Bushchat. You will need to check range for your area.