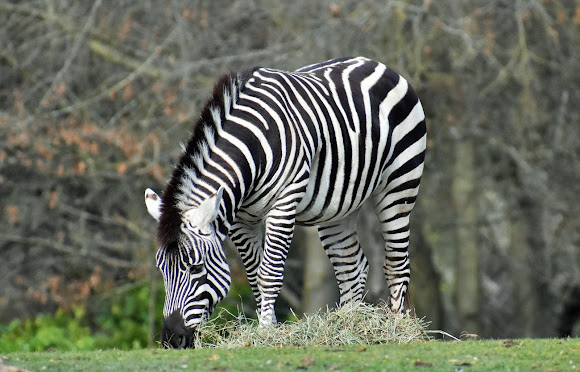 Zebras have distinctive black-and-white striped coats. Their stripes come in different patterns, unique to each individual. See notes for more information on the stripes.

Spotted at the Woodland Park Zoo. The plains zebra's range is fragmented, but spans much of southern and eastern Africa south of the Sahara. Its habitat is generally, but not exclusively, treeless grasslands and savanna woodlands, both tropical and temperate. They generally avoid desert, dense rainforest, and permanent wetlands, and rarely stray more than 30 km from a water source. (Wikipedia)

It was previously believed that zebras were white animals with black stripes, since some zebras have white underbellies. Embryological evidence, however, shows that the animal's background color is black and the white stripes and bellies are additions. It is likely that the stripes are caused by a combination of factors. The stripes are typically vertical on the head, neck, forequarters, and main body, with horizontal stripes at the rear and on the legs of the animal. A wide variety of hypotheses have been proposed to account for the evolution of the striking stripes of zebras. The more traditional of these (1 and 2, below) relate to camouflage. The vertical striping may help the zebra hide in the grass by disrupting its outline. In addition, even at moderate distances, the striking striping merges to an apparent grey. However, the camouflage has been contested with arguments that most of a zebra's predators (such as lions and hyenas) cannot see well at a distance, and are more likely to have smelled or heard a zebra before seeing it from a distance, especially at night. The stripes may help to confuse predators by motion dazzle—a group of zebras standing or moving close together may appear as one large mass of flickering stripes, making it more difficult for the lion to pick out a target. It has been suggested that when moving, the stripes may confuse observers, such as mammalian predators and biting insects, by two visual illusions: the wagon-wheel effect, where the perceived motion is inverted, and the barberpole illusion, where the perceived motion is in a wrong direction. The stripes may serve as visual cues and identification. Although the striping pattern is unique to each individual, it is not known whether zebras can recognize one another by their stripes. Experiments by different researchers indicate that the stripes are effective in attracting fewer flies, including blood-sucking tsetse flies and tabanid horseflies] A 2012 experiment in Hungary showed that zebra-striped models were nearly minimally attractive to tabanid horseflies. These flies are attracted to linearly polarized light, and the study showed that black and white stripes disrupt the attractive pattern. Further, attractiveness increases with stripe width, so the relatively narrow stripes of the three living species of zebras should be unattractive to horseflies. In 2019 scientists performed an experiment where they put stripes on horses, and their findings suggest that zebras likely evolved to have stripes in order to avert attacks from biting flies. Stripes may be used to cool the zebra. Air may move more quickly over black light-absorbing stripes while moving more slowly over white stripes. This would create convection currents around the zebra that would cool it. One study analyzes that zebras have more stripes in hotter habitats. https://en.wikipedia.org/wiki/Zebra

Thank you so much Roy.