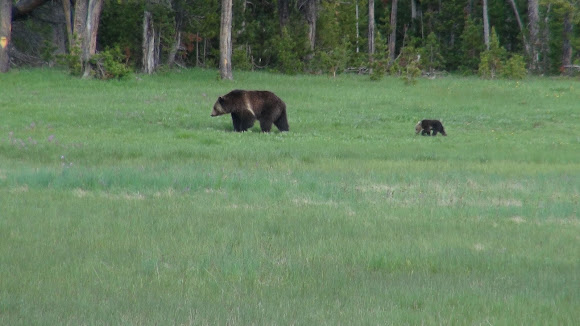 During the 2014 summer, I went to Yellowstone Park in Wyoming, USA. It was rare to find bears there but me and my relatives were in for a surprise. These are two grizzly bears. The small cub is about a size of a medium sized dog, however the adult bear is taller than the human when standing up. The colors were dark brown and had a bit of lighter brown. The cub had a light brown face unlike it's parent.

To tell the difference between the Grizzly and the black bear is that the black bears do not have the iconic hump on their shoulders that Grizzlies do. Grizzly bears in Yellowstone will eat grass, nuts and prey, such as weak or dead animals. In order for cubs to survive, the adults will act aggressive and may attack if one were to go near the cub.