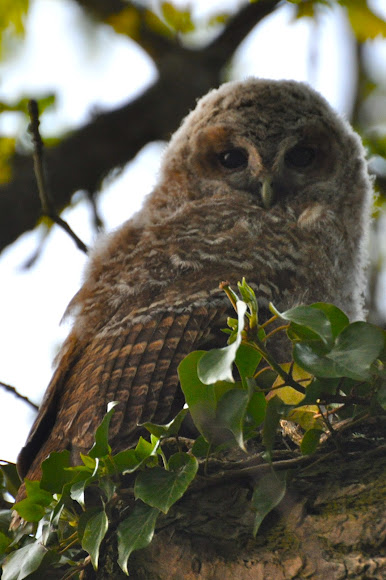 Tawny owls are the most common and widespread of British owls. They emit the characteristic courtship ‘twit-twooo’ which is actually a duet between male and female. Typically, tawny owls occupy a favourite perch in broadleaf woodlands, from which they drop on to unsuspecting small mammals, such as voles. The inedible remains are regurgitated in the form of a pellet. Labour is divided between breeding pairs since the female incubates the clutch of eggs, and the male is responsible for feeding the chicks once they hatch.

Photo's show 2 offspring belonging to my home breeding pair. I estimate their age at ~35 days.

Ya! The second pic isn't working for me ether.

Great positions in the tree!

That's a shame, it seems to be working at my end... I'll try reuploading later

So cute!! Great series! I couldn't see the 2nd photo...would love to!