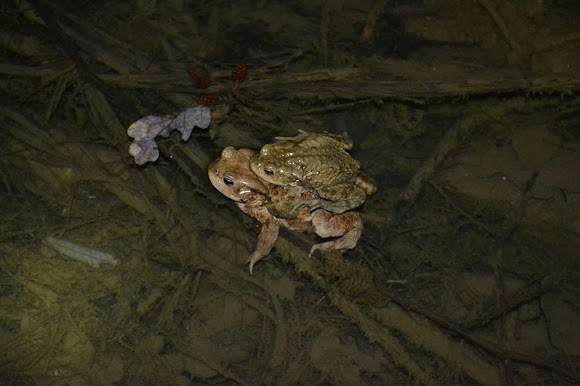 Common toads in amplexus in water during mating season in March. There are a lot more males than females of common toads, so males have to make quite an effort to have a chance to mate. If you pick up a male during this time, he will cling on to your fingers with his front legs as if your hand was a female. It is quite suprising how much strength they have! It must be really hard to get a lady when there are so few of them and you have so many competitors. However, when a lucky male will finaly grab on to his girl, he will not let her go easily, so sometimes females must carry one or more males on their back even before they get to the water where they would mate. In the water it sometimes happens, that 8 or even more males grab on to one poor female so that they form some kind of a toad ball and this can be lethal for the female as she drowns because she can not get to the surface to breathe. Tragic.

In a pond next to a forest.