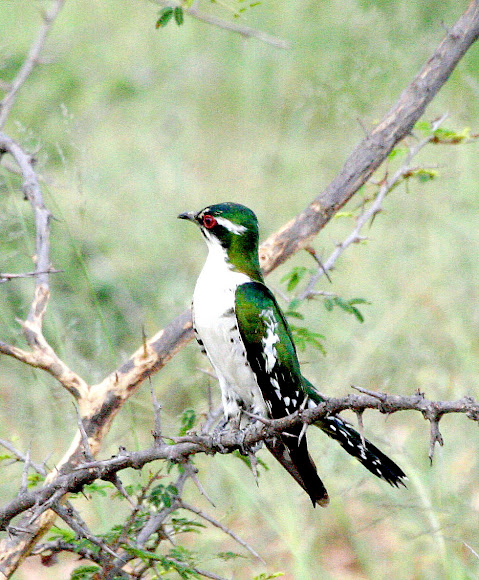 a relatively small cuckoo, 17-19cm, the male bird is easily recognizable by their bright metallic green and white plumage and red eye, the female is more brown and white with just a hint of green. However the birds are far more frequently recognized on the wing by their incessant dee-dee-dee-deederik calls.

Its not so often that one actually gets to see the beautiful colours of this bird. Normally, one only hears these birds then see them zip past silhouetted against the sky, the males set up territories and noisily defend them. This particular individual was sitting in a low thorn bush beside a dirt track which I had pulled off the road into to allow my dogs a 5 minute pit stop. As I pulled up, there the bird was just in front of us and he didn't fly off. I would guess he had a female close by, although I didn't see her, and was loathe to miss his opportunity there.

Lovely series of this striking bird!

What a beautiful colour for a bird :)

Congrats on spotting an amazing bird!