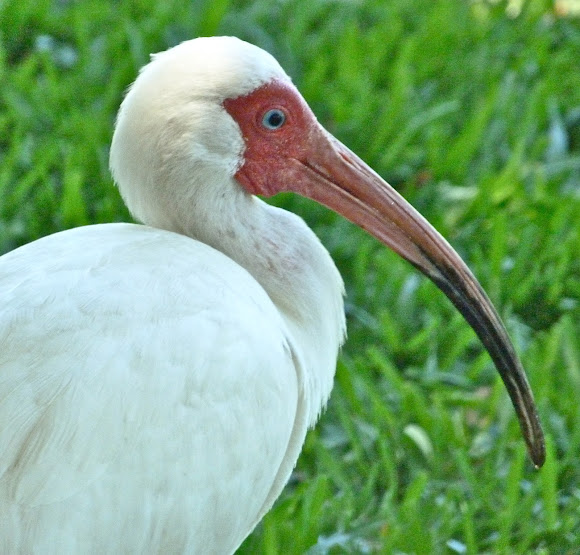 This ibis is a medium-sized bird with an overall white plumage, bright red-orange down-curved bill and long legs, and black wing tips that are usually only visible in flight. Males are larger and have longer bills than females. The breeding range runs along the Gulf and Atlantic Coast, and the coasts of Mexico and Central America. Outside the breeding period, the range extends further inland in North America and also includes the Caribbean. The diet consists primarily of small aquatic prey such as insects and small fishes. Crayfish are its preferred food in most regions; however, it can adjust its diet according to the habitat and prey abundance. It is a tactile non-visual forager, whose main foraging behavior is probing with its beak at the bottom of shallow water to feel for and to capture its prey. During the breeding season, the American White Ibis gathers in huge colonies near water. Pairs are predominantly monogamous and both parents care for the young, although males tend to engage in extra-pair copulation with other females to increase their reproductive success. Males have also been found to pirate food from unmated females and juveniles during the breeding season. Human pollution has affected the behavior of the American White Ibis via an increase in the concentrations of methylmercury, which is released into the environment from untreated waste. Exposure to methylmercury alters the hormone levels of American White Ibis, affecting their mating and nesting behavior and leading to lower reproduction rates.

We spotted 3 pairs close to the beach. The one in the first photo & in the foreground of photos 3 & 4 only had one leg, the other being just a stump a few inches long. It didn't appear to affect him in any obvious way.

Thanks Lorelei!
Nancy, I think the injury was likely to have been caused by discarded fishing line as there were quite a few fishermen in the area. It's a pet peeve of mine - wherever I go where there is fishing I always see loads of trash that has been carelessly dropped, even when there are garbage cans provided. I regularly pick up long lengths of fishing line, broken glass, hooks & other potentially lethal junk around the lakes of our local state parks. :(
Jacob, I am always amazed by how well so many animals manage to survive & adapt after major injuries!

Surprising it did not die of infection, if it was from an accident.

I doubt that mercury is the culprit here. It is mostly likely an accident that led to the missing leg. Wading birds often encounter other creatures, like crabs, turtles, small gators, that can injury their limbs and toes. (I've seen many wood storks missing toes because of stone crabs or blue crabs they've stepped on in the mud.) The most pernicous cause of these injuries is entanglement in discarded or unretrieved fishing line.

Great series Karen! I wonder if the deformity is another effect of mercury exposure.