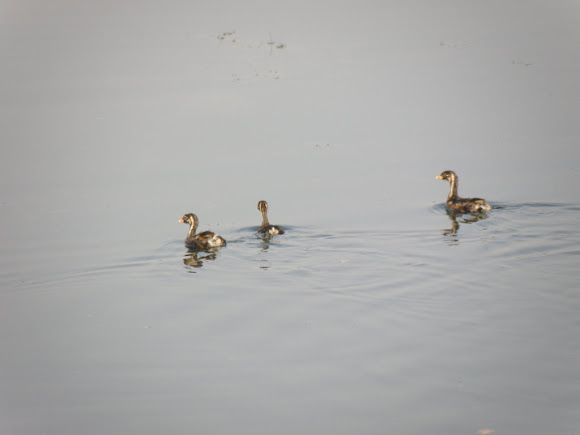 The Little Grebe, also known as Dabchick, is a member of the grebe family of water birds. At 23 to 29 cm in length it is the smallest European member of its family. The Little Grebe is a small water bird with a pointed bill. The adult is unmistakable in summer, predominantly dark above with its rich, rufous colour neck, cheeks and flanks, and bright yellow gape. The rufous is replaced by a dirty brownish grey in non-breeding and juvenile birds. Juvenile birds have a yellow bill with a small black tip, and black and white streaks on the cheeks and sides of the neck as seen below. This yellow bill darkens as the juveniles age, eventually turning black once in adulthood In winter, its size, buff plumage, with a darker back and cap, and “powder puff” rear end enable easy identification of this species. The Little Grebe's breeding call, given singly or in duet, is a trilled repeated weet-weet-weet or wee-wee-wee which sounds like a horse whinnying.

It is commonly found in open bodies of water across most of its range. This bird breeds in small colonies in heavily vegetated areas of freshwater lakes across Europe, much of Asia down to New Guinea, and most of Africa. Most birds move to more open or coastal waters in winter, but it is only migratory in those parts of its range where the waters freeze. Outside of breeding season, it moves into more open water, occasionally even appearing on the coast in small bays.[1

The Little Grebe is an excellent swimmer and diver and pursues its fish and aquatic invertebrate prey underwater. It uses the vegetation skilfully as a hiding place. Like all grebes, it nests at the water's edge, since its legs are set very far back and it cannot walk well. Usually four to seven eggs are laid. When the adult bird leaves the nest it usually takes care to cover the eggs with weeds. This makes it less likely to be detected by predators.[4] The young leave the nest and can swim soon after hatching, and chicks are often carried on the backs of the swimming adults.[5] In India, the species breeds during the rainy season.[6]

Hi Shri!
I would appreciate if you would update the ID of this and many other spottings which have been identified by others.