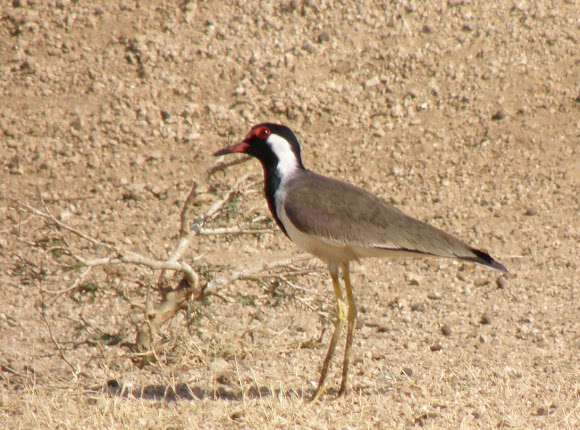 Red-wattled Lapwing. These are large waders, about 35cm long. The wings and back are light brown with a purple sheen, but head and chest and front part of neck are black. Prominently white patch runs between these two colours, from belly and tail, flanking the neck to the sides of crown. Short tail is tipped black. A red fleshy wattle in front of each eye, black-tipped red bill, and the long legs are yellow. In flight, prominent white wing bars formed by the white on the secondary coverts. It has characteristic loud alarm calls which are variously rendered as "did he do it" or "pity to do it."

It breeds from West Asia (Iraq, SW Iran, the Arabian/Persian Gulf) eastwards across South Asia (Baluchistan, Afghanistan, Pakistan, the entire Indian subcontinent up to Kanyakumari and up to 1800m in Kashmir/Nepal), with another sub-species further east in Southeast Asia. May migrate altitudinally in spring and autumn (e.g. in N. Baluchistan or NW Pakistan), and spreads out widely in the monsoons[5] on creation of requisite habitats, but by and large the populations are resident.[10] This species is declining in its western range, but is abundant in much of South Asia, being seen at almost any wetland habitat in its range.

The local names include Titvi in Marathi, titeeri (Hindi), tateehar (Sindhi), titodi (Gujarati), hatatut (Kashmiri), balighora (Assamese), yennappa chitawa (Telugu),[2] aal-kaati (Tamil, meaning "human indicator").[2]. The call of the bird is considered to bring bad luck. In many parts of India, a local belief is that the bird sleeps on its back with the legs upwards and an associated Hindi metaphor Tithiri se asman thama jayega ("can the pee-wit support the heavens?") is used when referring to persons undertaking tasks beyond their ability or strength.[2] In parts of Rajasthan it is believed that the laying of eggs by the lapwing on high ground was an indication of good rains to come.[29] The eggs are known to be collected by practitioners of folk medicine. [30][31][32] In Iraq, where the bird is known as Tatwa; there is a common folklore belief that it is connected to bad luck, and the warning call may bring bad fortune or even death to the area or house over which the bird was flying. Reference -Wikipedia