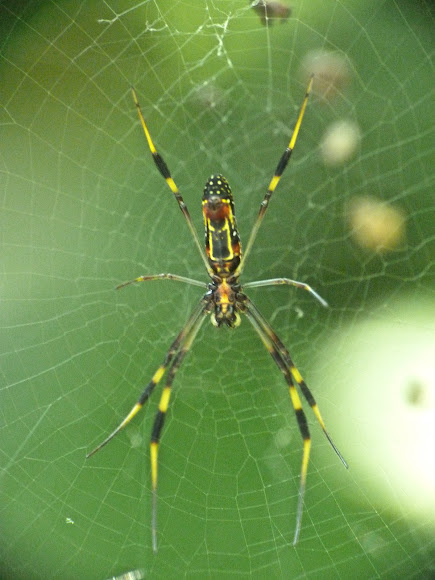 Nephila clavipes lives in the warmer regions of the Americas. The large size and bright colours of the species make it distinctive. The female is much larger than the male. In the United States, it ranges throughout the coastal southeast and inland, from North Carolina to Texas. Its distribution in many regions seems localized, and it may be completely absent (or just hard to find) over wide areas. Conversely, in some arboreal or swampy nooks, adults and their webs can be found in large concentrations, especially near the coast. Golden orb-weavers are especially numerous in the time after summer and before fall in the south-eastern and southern U.S. This species is widespread — and often common — in large parts of Central America and warmer regions of South America. The web of a mature female can reach one meter in width, the yellow threads appearing as a rich gold in sunlight. Males come into the female's web for copulating. After mating the female spins an egg sac on a tree, laying hundreds of eggs in one sac. While it is venomous to humans, it will only bite if pinched. The bite is usually relatively harmless and only leads to slight redness and localized pain. The silk of N. clavipes has recently been used to help in mammalian neuronal regeneration. In vitro experiments showed that a single thread of silk can lead a severed neuron through the body to the site it was severed from. With a tensile strength of 4×109 N/m2, it exceeds that of steel by a factor of six. It is not recognized by the immune system.

One of several small golden silk orbweavers with a body length of about 5-8 mm that I found in one of the public gardens by the beach. I assume due to the size that these were either males or immature females.