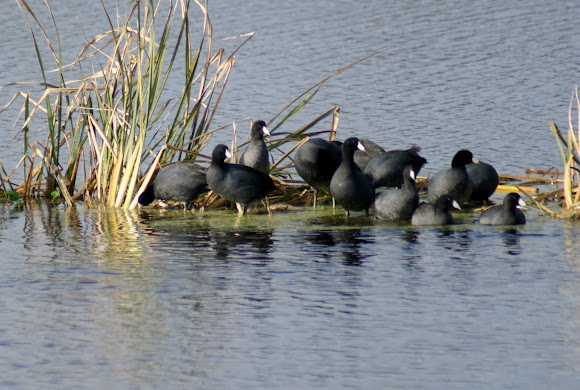 The American coot, also known as a mud hen, is a bird of the family Rallidae. Though commonly mistaken to be ducks, American coots belong to a distinct order. © Greg Bishop The waterborne American Coot is one good reminder that not everything that floats is a duck. A close look at a coot—that small head, those scrawny legs—reveals a different kind of bird entirely. Their dark bodies and white faces are common sights in nearly any open water across the continent, and they often mix with ducks. But they’re closer relatives of the gangly Sandhill Crane and the nearly invisible rails than of Mallards or teal. The American Coot is a plump, chickenlike bird with a rounded head and a sloping bill. Their tiny tail, short wings, and large feet are visible on the rare occasions they take flight. Coots are dark-gray to black birds with a bright-white bill and forehead. The legs are yellow-green. At close range you may see a small patch of red on the forehead.

Coots can be found in ponds in city parks, in marshes, reservoirs, along the edges of lakes, and in roadside ditches, sewage treatment ponds, and saltwater inlets or salt marshes. This one was observed at constructed wetlands at the Phinizy Swamp Nature Park near Richmond County, GA.