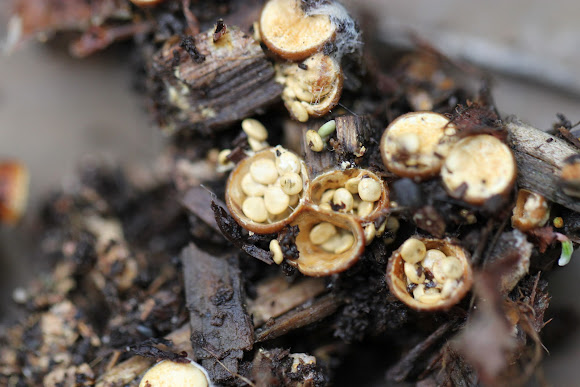 Composted manure with sawdust in it, used as a mulch on my garden last summer. There are lots of fungus in it this spring!

I am not totally sure which species I have here. Does anyone know? It doesn't look like Cyathus striatus at all, but I think those are little cords (photo 1) attaching the peridioles to the cap. Photo 4 shows a developing cup that is still covered.

Birdlady,great cache,i'am not a specialist,so i'am not sure of the exact sp of your spotting,however i have this spotting id and in the comments you have two links that Lisa give at the time,i hope you can find the id of this one,is very similar to mine
http://www.projectnoah.org/spottings/165...

Are there any fungus specialists out there who can help decide the species here?