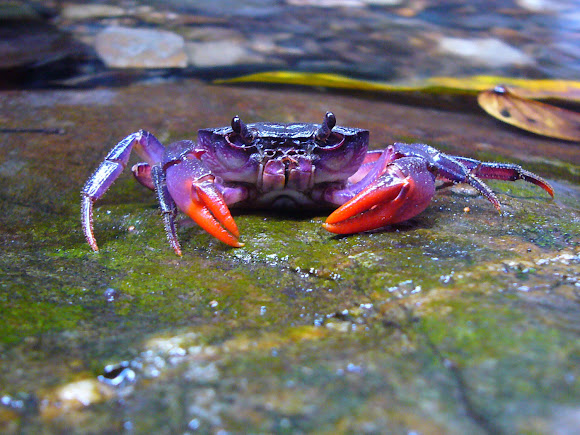 Four new species of Insulamon Ng and Takeda, 1992 were recently described in the scientific journal Raffles Bulletin of Zoology by Dr. Hendrik Freitag, formerly Visiting Professor at the De La Salle University Manila. When the genus was erected in 1992, it consisted only of a single species, Insulamon unicorn, which was described from a holotype male from Busuanga Island and several paratypes from Palawan Mainland. The latter turned out to be in fact a separate species. Based on new material of the AQUA Palawana collections and some older museum specimens, a total of five (5) species are recognized presently, four of which are new to science. They are: 1. Insulamon palawanense - It is the most widely distributed species on Palawan Island from Rizal in the south up to Roxas in the north. Recent records are from various barangays of Puerto Princesa. 2. Insulamon magnum – was found to be limited to northern Palawan Island, Philippines. 3. Insulamon johannchristiani – also limited to northern Palawan Island, Philippines. 4. Insulamon porculum – appears to be limited to Central Palawan Island, Philippines. Its unusual name refers to its curly pigtail-like distal part of the terminal segment of the Gonopod 1 (male first pleopod). Latin: Porculus (piglet). Taxonomy: Family Potamidae Ortmann, 1896 Subfamily Potamiscinae Bott, 1970 Genus Insulamon Ng & Takeda, 1992

Insulamon species, as most Southeast Asian Potamidae in general, inhabit small to medium-sized running water. They are semi-aquatic and hide in burrows at the stream bank, which are usually found under boulders and roots. Small to medium-sized individuals are frequently found in riffle stream sections among course particle organic matter. Insulamon crabs, as most Brachyura, are much more active in the night when they are foraging under water. Insulamon johannchristiani and I.magnum as well as I.palawanense and I. porculum, respectively, are sometimes found to occur sympatrically. A distinct habitat or behavioural partitioning among sympatric species of the genus was not observed. Some of the streams where Insulamon was recorded are inhabited by Parathelphusa species (Gecarcinucidae) too. However, a tendency at least, is apparent that Insulamon species rather occur in the rhithral, characterised by higher hydraulic stress, than in the potamal or slow flowing stream section where Parathelphusa is usually found (Freitag, 2005; Soniega 2012). In the Lake Manguao catchment, which has been sampled intensively, Parathelphusa manguao Freitag &Yeo, 2004, was collected from lower reaches of tributaries as well as the lake itself, while Insulamon magnum and I.johannchristiani occurred in upper stream reaches. However, the species covered in this paper are still regarded as lowland taxa. The highest altitude from where Insulamon was recorded is at 770 m above sea level (I. palawanense, Puerto Princesa). The rare Palawan-endemic Carpomon pomulum might replace Insulamon in higher altitudes. However, that species is only known from the ambiguous type locality the Matalingajan mountain range so far.

Nice shots, Jolly! Love the colors on the crab.

Welcome to the Crustacea Filipinana mission!

Thanks Mayra and Ava.