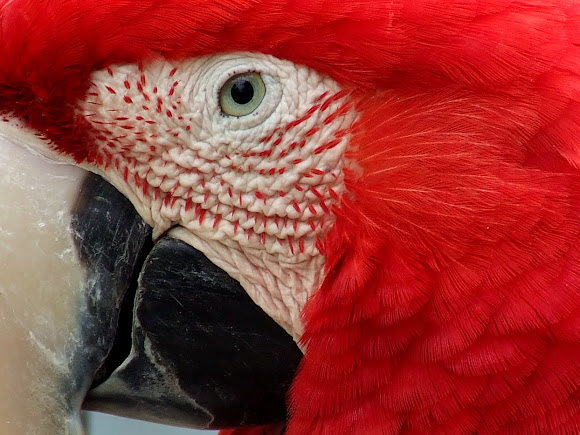 The Red-and-green Macaw (Ara chloropterus), also known as the Green-winged Macaw, is a large mostly-red macaw of the Ara genus. This is the largest of the Ara genus, widespread in the forests and woodlands of northern and central South America. However, in common with other macaws, in recent years there has been a marked decline in its numbers due to habitat loss and illegal capture for the parrot trade

spotted in the Vila Nova de Gaia Biological Park,i dont like to se animals in captivity,but even so,the educatif impact and the recovering processes need instalations like this and the animals are gorgeous even in cages :) http://www.google.pt/url?sa=t&rct=j&...

Xiao the other one ,thanks again,i left space for one more photo to load in future oportunites
http://www.projectnoah.org/spottings/117...

thanks Xiao,i put another photo,where we can se the all bird,i change the id and erase the wrong photos,now i'am going to load the other one that is a red macaw :)

wow Xiao,you naillet,i haved been researching based in your tip and they two diferent macaw's,great new,now,i have to make two spottings and to that i'll use more photos that show better your idea,thanks for the correction again

thanks Satyen,it's a lovely bird

yeah :( it make me suffer two,these are from breading programs,not taken from the wild,however it hurt me the same,it's first time that i spott captive animals and it's allways double feelings,in this case i understand,they have it to show to thekids in special visits,even so ,thanks for sharing your feelings about that

Wow another wonderful Photos of a beautiful bird !

Thanks williefromwi for you kind words