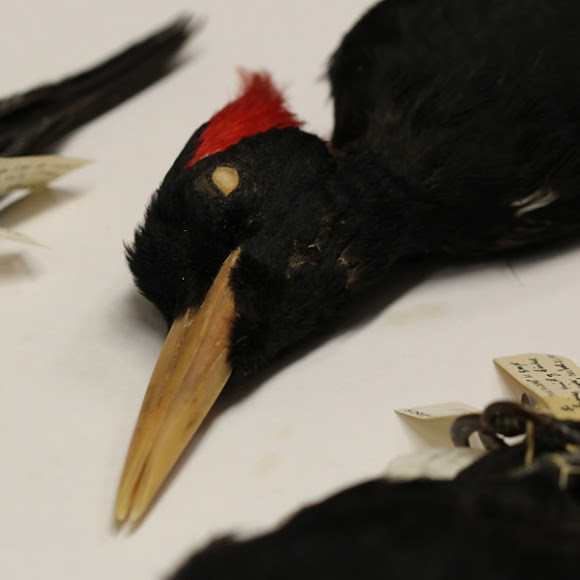 These are pictures of the now assumed extinct Imperial Woodpecker taken at the Moore Laboratory of Zoology during a tour. The male had a red-sided crest, but was otherwise black, apart from the inner primaries, which were white-tipped, white secondaries, and a white scapular stripe which unlike in the Ivory-billed Woodpecker did not extend on the neck. The female was similar but the crest was all black and (unlike the Ivorybill) recurved at the top. In the third picture, you can just see the "spit curl" on the female.

It preferred open montane forests made up of Durango, Mexican White, Loblolly and Montezuma Pines and oak, usually between 2100 and 2700 meters ASL.

The Imperial Woodpecker was last sighted in 1956. I've attached a video housed by Cornell University that is the only known footage of one of these birds in flight. It shows a female. The Moore Laboratory of Zoology houses approximately 60,000 bird specimens. Most are from Mexico and the southwest. Most of the collection was put together before 1900, and it houses both extinct and rare species. http://college.oxy.edu/mlz/

WOW!! A video of a extinct bird!!
It would have been something else to have a video of the extinct Dodo bird, but I would have cried my eyes out...Very sad. Thank you for sharing

Christine, your documentation and photo of the Imperial Woodpecker specimen are included in today's Project Noah blog: http://blog.projectnoah.org/post/5715637...

You're both quite welcome! The story of the Imperial Woodpecker is truly tragic, as it is such a senseless loss.

The Moore is a functioning research laboratory. One project they're working on is taxonomy of bird species through DNA. It isn't standardly open to the public, but occasionally may be accessed by contacting directly. When I saw that an option for Obscura Day was a chance to visit there, I immediately booked the tour. It was fascinating!

I just read the article on the Cornell Lab of Ornithology and was brought to tears.

http://www.allaboutbirds.org/page.aspx?p...
for those daring enough to read about what humans are capable of...

Thank you again for sharing such a wonderful piece of ecological and ornithological history with us!

Well..thanks..it must have been a real treat! I look forward to more of your posts!

Hi there! I'm not an pro scientist of any sort. I did work for a year as the graphics specialist for the Entomology Department at Purdue University, and I have a natural love of science and all creatures!
I visited The Moore on "Obscura Day". It's April 28, and it's a worldwide celebration of experiencing things normally hidden or odd. Some events are free, some inexpensive, and some costly. Here's the website: http://obscuraday.com/
There was a small charge to visit the Moore, but we had over an hour in a group of 15 (I think) examining birds we'd probably never see otherwise! John, who maintains the Moore, was our host, and was completely gracious with his time. I have many more pictures, but opted only to post those of the three extinct birds that might otherwise not appear here.

Just wondering why you are looking at these specimens...are you an ornithologist?
Video has really improved...even for amateurs, but thank goodness Cornell is keeping these old records!