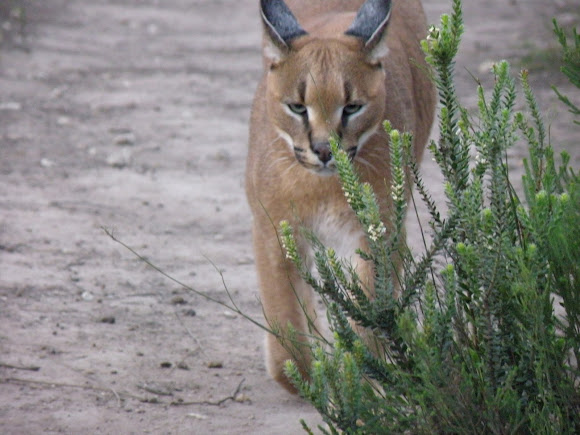 caracal, is a fiercely territorial medium-sized cat ranging over Western Asia, South Asia and Africa. he caracal is a slender, yet muscular, cat, with long legs and a short tail. Males typically weigh 13 to 18 kilograms (29 to 40 lb), while females weigh about 11 kilograms (24 lb).[6] The caracal resembles a Eurasian Lynx, and for a long time it was considered a close relative of the lynxes. The colour of the fur varies between wine-red, grey, or sand-coloured. Melanistic (black) caracals also occur.[3] Young caracals bear reddish spots on the underside; adults do not have markings except for black spots above the eyes and small white patches around the eyes and nose. Underparts of chin and body are white, and a narrow black line runs from the corner of the eye to the nose. The pupils of a caracal's eyes contract to form circles rather than the slits found in most small cats.[7] The most conspicuous feature of the caracal is elongated, tufted black ears, which also explain the origin of its name, karakulak, Turkish for "black ear". The feet of a caracal have numerous stiff hairs growing between the pads. These probably help the animal walk on soft sand. The jaw is short and equipped with powerful teeth. About 92 percent of caracals lack the second upper premolar teeth

The word caracal comes from the Turkish word "karakulak", meaning "black ear".[3] In North India and Pakistan, the caracal is locally known as syahgosh (स्याहगोष/سیاه گوش) which is a Persian term meaning black ears.[4] In Afrikaans it is called Rooikat, "red cat".Although it has traditionally had the alternative names Persian Lynx, Egyptian Lynx and African Lynx, it is no longer considered to be an actual lynx. This cat is in TENIKAWA WILD CAT RESERVE, South Africa

Thanks. This cat was in a wild cat reserve at Knysna, South Africa

Beautiful cat, but you need to indicate if it was in captivity!