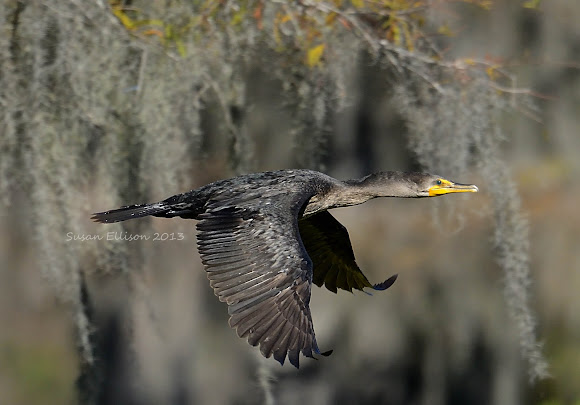 Double-crested Cormorants are large waterbirds with small heads on long, kinked necks. They have thin, strongly hooked bills, roughly the length of the head. Their heavy bodies sit low in the water. Color Pattern:Adults are brown-black with a small patch of yellow-orange skin on the face. Immatures are browner overall, palest on the neck and breast. In the breeding season, adults develop a small double crest of stringy black or white feathers.

Double-crested Cormorants are the most widespread cormorant in North America, and the one most frequently seen in freshwater. They breed on the coast as well as on large inland lakes. They form colonies of stick nests built high in trees on islands or in patches of flooded timber.

Cormorants often stand in the sun with their wings spread out to dry. They have less preen oil than other birds, so their feathers can get soaked rather than shedding water like a duck’s. Though this seems like a problem for a bird that spends its life in water, wet feathers probably make it easier for cormorants to hunt underwater with agility and speed

Beautiful photo of this bird in flight.

Susan, I totally missed this one. Beautiful shot!

A very elegant portrait. Good work with the camera :)