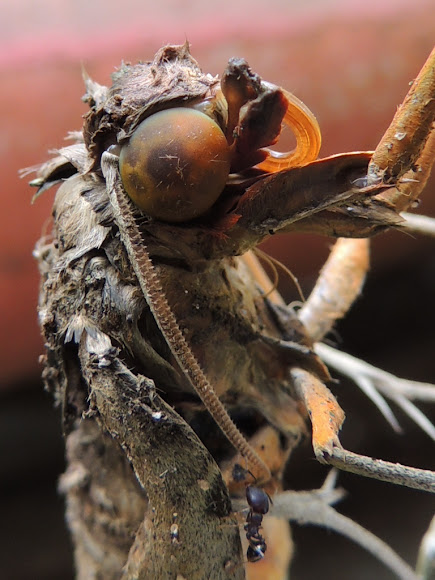 I gound this specimen in a region of transition between the Cerrado and Atlantic Florest.

I don't have sure if the moth lost the wings (in a ant attack or other someway) or the wings are this way for some reason. And, when I touched (to have sure if live), the moth released a jet of white liquid, as a defense form. Look that have a "Turtle Ant" ("Cephalotes sp.") near the anthenna on first photo.

Uh, thanks "bayucca". I thought in the malformed wings too... But don't has very sure yet.
I too thought in a "Sphingidae", cause is a Family very-very common on the region.
So, I think that probably the "malformed wings" it's a good choice, right?
And... You know tell me if the "release a jet of white liquid, as a defense form" its common on "Sphingidae", or just of some species? I tryed find something about this, but don't find very good informations...
I keep trying...