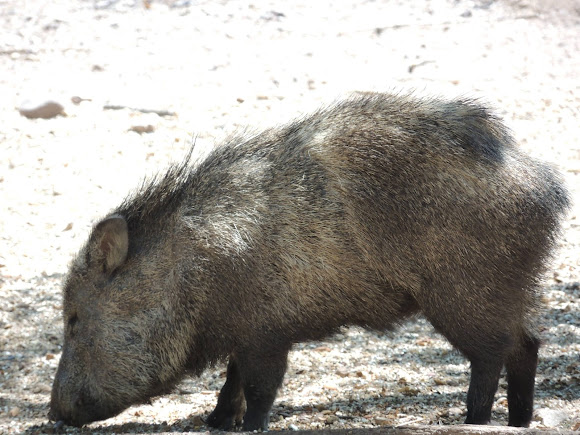 The collared peccary (Pecari tajacu) is a species of mammal in the family Tayassuidae that is found in North, Central, and South America. They are commonly referred to as javelina, saíno or báquiro, although these terms are also used to describe other species in the family. The species is also known as the musk hog, Mexican hog. and a javelina. In Trinidad, it is colloquially known as quenk. Although somewhat related to the pigs and frequently referred to as one, this species and the other peccaries are no longer classified in the pig family, Suidae.

The collared peccary is a widespread creature that can be found throughout much of the tropical and subtropical Americas, ranging from the Southwestern United States to northern Argentina in South America. The only Caribbean island it is native to, however, is Trinidad, although introduced populations exist in Cuba. It inhabits deserts and xeric shrublands, tropical and subtropical grasslands, savannas, and shrublands, flooded grasslands and savannas, tropical and subtropical dry broadleaf forests, and several other habitats, as well. In addition, it is well adapted to habitats shared by humans, merely requiring sufficient cover; they can be found in cities and agricultural land throughout their range, where they will add human garden plants to their menu. Notable populations are known to exist in the suburbs of Phoenix and Tucson, Arizona.