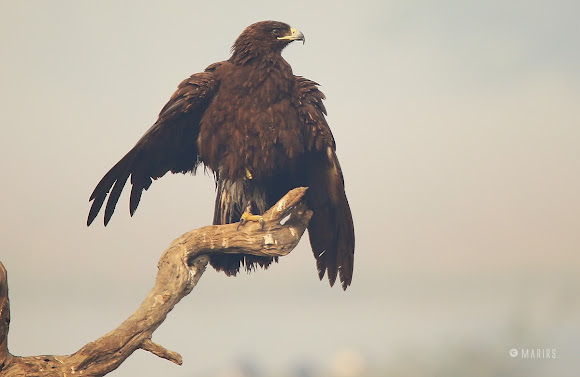 The greater spotted eagle, occasionally just called the spotted eagle, is a large bird of prey. Like all typical eagles, it belongs to the family Accipitridae. he eagle is 59–71 cm (23–28 in) in length and has a wingspan of 157–179 cm (5.15–5.87 ft). Typical body mass is 1.6–2.5 kg (3.5–5.5 lb), with an occasional big female weighing up to 3.2 kg (7.1 lb). There is often a less obvious white patch on the upperwings, but a light crescent on the primary remiges is a good field mark. The white V mark on the rump is less clear-cut in adults than in the lesser spotted eagle. The juvenile has white spots all over its wings and lacks a lighter nape patch.

Yes it almost looks half wet.

In the 3rd photo, he actually was seeing something and was ready to take off, but then did not take off... He sat there quietly again.

Wow - that third photo is quite unique. Do you have any idea why it fluffed out its feathers like that?