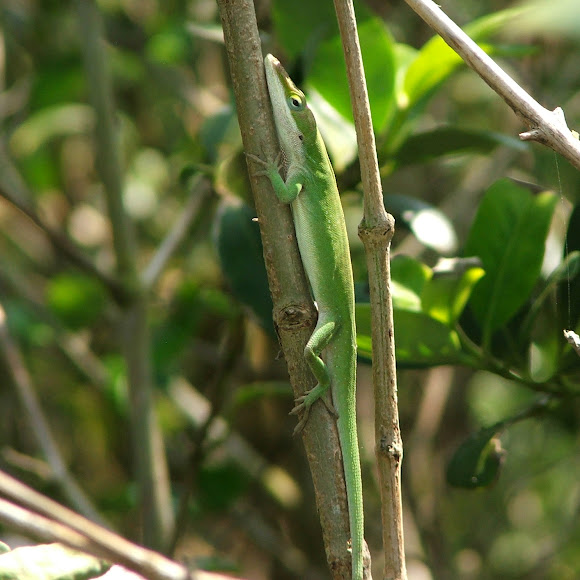 small to medium-sized lizard, with a slender body. The head is long and pointed with ridges between the eyes and nostrils, and smaller ones on the top of the head. The toes have adhesive pads to facilitate climbing. They exhibit sexual dimorphism, the males being fifteen percent larger. The male dewlap (throat fan) is three times the size of the female's and red, whereas that of the female is white.[3] Adult males are usually 12.5–20.3 cm (4.9–8.0 in) long, with about 60-70% of which is made up of its tail, with a body length up to 7.5 cm (3.0 in) and can weigh from 3–7 g (0.11–0.25 oz). — Wikipedia

Arboreal in nature but may be seen on the ground and frequently seen on shrubs in the low country of the Carolinas, but is also a common sight in urban areas on steps and railings, adjacent to foliage. It is common on roadsides, the edges of forests where there are shrubs and vines, but also building sites having abundant foliage and sunlight. Their preferred habitat is moist forests, and brushy clearings.— Wikipedia

It is also sometimes referred to as the American chameleon due to its ability to change color from several brown hues to bright green and its somewhat similar appearance.— Wikipedia