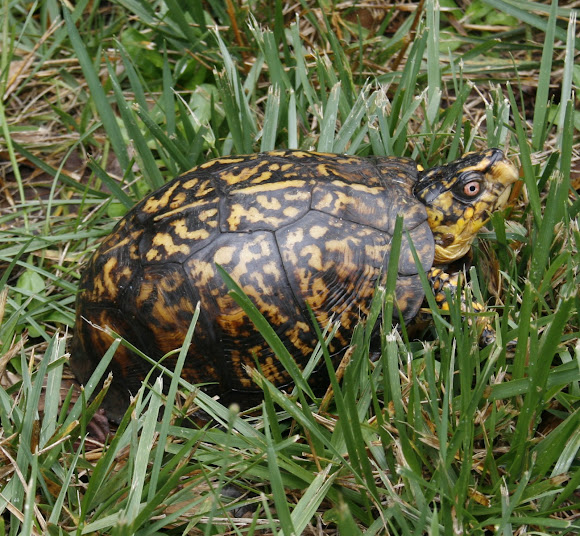 Healthy-looking adult male, found strolling in the grass after a rainstorm. (The red eyes, concave plastron, and less rounded carapace identify it as a male.) About six inches in length. Box turtles are unique in that their hinged plastrons allow them to close their shells completely, as this handsome but shy critter demonstrates in photos four and five. The male's concave plastron allows it to climb on top of the female's rounded carapace for mating. During spring and summer rainstorms, box turtles come out of hiding to mate, which is probably why I found him out in the open. There is at least one female living nearby, since I have recorded two spottings of her (or them) within a month or so: http://www.projectnoah.org/spottings/111... http://www.projectnoah.org/spottings/102... I was surprised to learn (on Wikipedia) that in 2011 the IUCN reclassified Box Turtles from "Near Threatened" to "Vulnerable" (the level before "Endangered"), having found "a widespread, persistent, and ongoing gradual decline of Terrapene carolina that probably excedes 32% over three generations" (Wiki). This is due to their slow maturation, low reproductive rates, and high degree of human-caused mortality (being hit by cars, farm equipment, lawn mowers, etc., and being taken from the wild for the pet trade, in which they often do poorly). They seem to be doing fine here, as this is the second or third individual I've spotted in my yard this month, without looking for them. I will be on the lookout for turtle eggs and hatchlings, though females usually hide their nests well and the young are rarely seen.

My back yard, in the grass beside a flowerbed. Exactly the same place as my two earlier Box Turtle spottings. There is a large wooded area behind the yard, where the turtles probably spend most of their time. All three times that I've seen one, it's been the morning after a rainstorm.