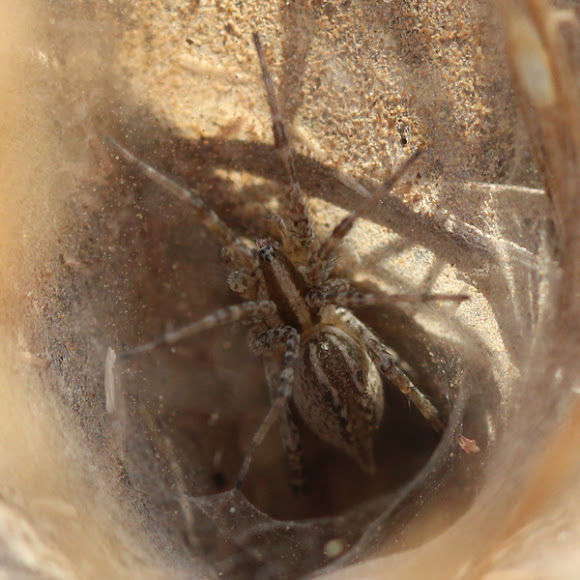 Grass spiders may be recognized by the arrangement of their eight eyes into three rows. The larger specimens (depending on species) can get up to approximately 19 mm in body length. The top row has two eyes, the middle row has four eyes, and the bottom row has two eyes (spaced wider than the ones on the top row). They also have two prominent hind spinnerets, and somewhat indistinct bands on their legs. They also have two dark bands running down either side of the cephalothorax.

Grass spiders are a type of funnel web spider, that lives hidden in webs they build in grassy areas. It's easiest to see them in the early morning when they're most active, and not hiding in their tunnels. This spotting was done at the Bolsa Chica Wetlands, an estuary and bird sanctuary located next to the Pacific Ocean.

These spiders are harmless to humans, with Chilicerae that cannot penetrate human skin. They are fast running, because that's how they catch their prey, and so can be startling! The 13 individual species are very similar in appearance, so only an expert should try to identify beyond genus.

Thanks so much, that's really nice of you to say!
This image was shot with a true macro lens, so no zoom, just a 1:1 ratio (1.6 actually based on my camera type). I use a 100mm Canon lens on a T2i body. I would have been able to get more detail, but grass spiders scare so easily! In the un-cropped photo, the spider only takes up a portion of the center (about 1/5 across). The cropping was done in Photoshop at the same time that I resized for display here.

BTW,this has become my fav spotting because it is so educational and I learned so much from it and it is fascinating!!

Awesome Christine! Thanks so much! How many times zoom was this?

Added a picture with an insert drawn tracing of the eye arrangement. :)

The above front view shows the eyes, but the middle row is so tight that it's hard to distinguish all four. This is as clean as I can get from my source images. These are skittish spiders!

If you have a picture of the head with the eyes ,that would be awesome!

Thanks Emma! Their heads are TINY! I'll see if I can scrounge up a detail for you from that set, but the eye positioning may make it difficult.

Welcome to Project Noah Christine!
I spotted this spider today. I was interested in seeing the arrangement of its 8 eyes. But even with a 16X zoom I could not.
I could see the " Spinner" at the tip of its abdomen though!