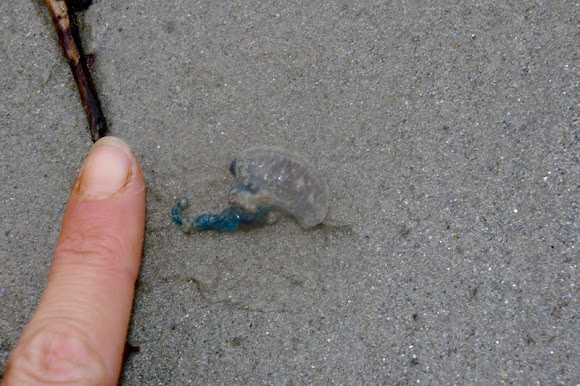 The Portuguese man o' war is composed of four types of polyp.[3] One of the polyps, a gas-filled bladder called the pneumatophore (commonly known as the sail), enables the organism to float. This sail is bilaterally symmetrical, with the tentacles at one end, and is translucent, tinged blue, purple, pink or mauve. It may be 9 to 30 centimetres (4 to 12 in) long and may extend as much as 15 centimetres (6 in) above the water.

The Portuguese man o' war lives at the surface of the ocean. The gas-filled bladder, or pneumatophore, remains at the surface, while the remainder is submerged.[3] Since the man o' war has no means of propulsion, it is moved by a combination of winds, currents, and tides. Although it can be found anywhere in the open ocean (especially warm water seas), it is most commonly found in the tropical and subtropical regions of the Pacific and Indian oceans and in the northern Atlantic Gulf Stream. The man o' war has been found as far north as the Bay of Fundy and the Hebrides.[4] In the Mediterranean Sea, the man o' war was first spotted off the coast of Spain, and then later in Corsica[clarification needed].[5][6] In 2010, the man o' war was sighted around Malta in the Mediterranean.[7] In the summer of 2009, Pembrokeshire County Council warned bathers in its waters that the organisms had been sighted in Welsh waters. In Ireland, there were dozens of confirmed sightings (in 2009–2010), from Termonfeckin in County Louth to the coast of County Antrim.[8] On the other side of the Atlantic, they wash ashore along the northern Gulf of Mexico and east and west coasts of Florida. An abundance of Portuguese men o' war can be found in the waters of Costa Rica, especially in March and April, while they are also found off of Guyana, Colombia, Jamaica, and Venezuela.[citation needed] They wash up on the shore during certain months of the year. They are reported abundantly in the waters near Karachi, Pakistan in the summer months, and are also common in the ocean off parts of Australia, where they are known more commonly as 'blue-bottles', and New Zealand. During these months, they come ashore in the Gulf of California after rain, where they are known as agua(s) mala(s) by locals.[citation needed] They are also frequently found along the east coast of South Africa and along the west coast of Africa such as the Gambia, particularly during winter storms if the wind has been blowing steadily on-shore for several hours, as well as around the Hawaiian Islands. Strong onshore winds may drive them into bays or onto beaches. It is rare for only a single Portuguese man o' war to be found; the discovery of one usually indicates the presence of many, as they are usually congregated by currents and winds into groups of thousands.[3] Attitudes to the presence of the Portuguese man o' war vary around the world. Given their sting, however, they must always be treated with caution, and the discovery of men o' war washed up on a beach may lead to the closure of the whole beach.