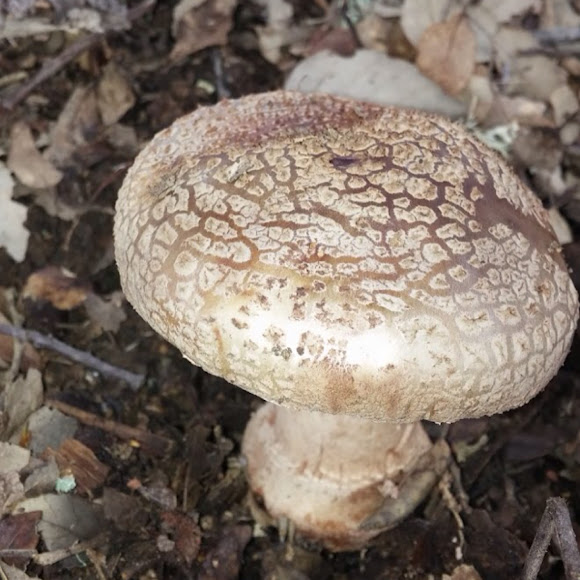 Blusher caps range from 5 to 20 cm diameter when fully expanded. It is often brownish-pink but very variable. Usually retaining irregularly distributed, off-white or grey fragments of the universal veil. Initially domed, but flattening at maturity and occasionally becoming slightly funnel-shaped. When damaged, the gills and cap flesh turn deep pink or dull red. In very wet weather the veil fragments may get washed from the cap, but the reddening of any damaged areas of an Amanita rubescens mushroom is always an aid to identification. Gills of Amanita rubescens are white, adnate to almost free of the stem, and crowded. In mature Blusher specimens the gills are often marked with pink or rusty red spots, and when handled the gills very quickly blush pink or dull red. Blusher stems are usually between 7 and 15 cm in length, the stem diameter is typically 1 to 2 cm. White above the stem ring but reddish-brown, often with deep pink flecks, below the stem ring. The stem flesh bruises pink when cut. The stem becomes hollow with age and bears a hanging stem ring that is quite thin and fragile, usually grooved, and often ragged. The volva of Amanita rubescens is visible only on very on immature specimens. As the fungus matures the volval remains disappear leaving a swollen base without any distinct basal rings.

Blushers are mycorhizal with hardwood and softwood trees; they are particularly abundant in many conifer forests on poor acidic soils, where they occur in small groups more often than singly.

Spoted in la codosera near to a village called la tojera