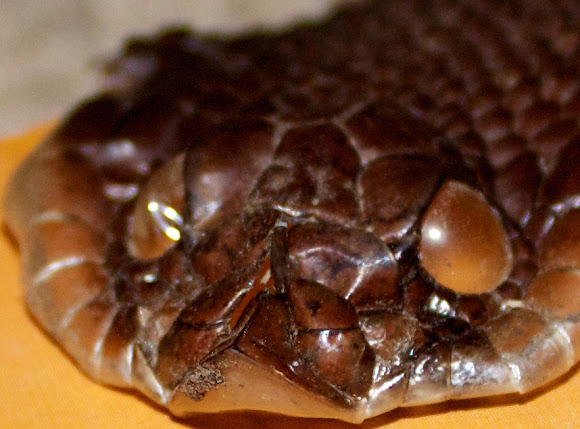 Complete, intact, recent snake shed for the Signs of Wildlife mission. 33 inches (83.8 cm) in length. Sheds like this one can often be used to identify the species of snake that the shed came from. With some patience and a good reptile field guide, it can even be easy. When finding a shed, know that it is an inside-out representation of the snake. If one turns the shed itself inside-out, you'll get a representation of the snake as you would see the snake itself. For example, In the first / main photo of this spotting, I've turned the head portion of the shed inside-out to see what the head would look like normally. The upturned snout, among other characteristics, identifies this shed to belong to the species Eastern Hog-Nosed Snake. Another identifying feature is that the dorsal scales are ridged, or keeled, as seen by examining the 3rd photo. The 2nd photo shows the head of the shed as I found it. The 4th photo shows the complete shed.

This shed was found near a big, old barn in a brushy field with lots of old, discarded boards, picnic table-tops, and building wood - a perfect habitat for many snake species since small rodents also thrive in this habitat and provide food for large snakes. This species can be found in a variety of habitats: sandy floodplains of rivers, old fields, open woods, or on rocky, wooded hillsides.

About the eastern hog-nosed snake (from Tom Johnson's book 'The Amphibians and Reptiles of Missouri', 2000): Known locally as the spreadhead or hissing viper, this is a harmless, nonvenomous species with a heavy body and pronounced upturned snout. The local names have been given to the hog-nosed snake because of the way it defends itself. When approached, it will hiss loudly and may even strike with its mouth closed. If this act fails to deter a predator, the snake will go into convulsions, open its mouth with the tongue hanging out, writhe about, release feces, roll over on its back, and then play dead! After feigning death and when the coast is clear, the snake will cautiously roll over and slither away to safety.

Such wonderful information! Thank you for taking the time to educate everyone and sharing this great series.

Thank you Luis and Keith!

Thanks Alice and Patty! :-)

Great spot and info. Neil! Thanks for sharing!

Thanks Antonio! I fully agree!

Great cache Neil,very nice info,is very educational to have the spotting acomplished with a complet info section,i like to do that also ,congrats and thanks for sharing

Excellent descriptive notes. I especially like the part about convulsing, and playing dead.

Nice one! And in Columbia, MO too.