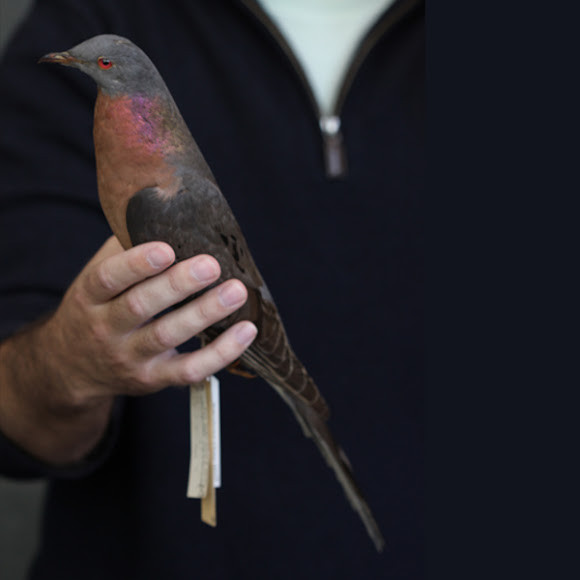 Extinct. These birds once numbered 3 billion to 5 billion in the U.S.! The Passenger Pigeon was larger than a Mourning Dove and had a body size similar to a large Rock Pigeon. The average weight of these pigeons was 340–400 grams (12–14 oz) and, per John James Audubon's account, length was 42 cm (16.5 in) in males and 38 cm (15 in) in females.[22] The Passenger Pigeon had a bluish gray head and rump, slate gray back, and a wine red breast. The male had black streaks on the scapulars and wing coverts and patches of pinkish iridescence at the sides of the neck changed in color to a shining metallic bronze, green, and purple at the back of the neck in various lights. Female and immature birds were similar marked but with duller gray on the back, a lighter rose breast and much less iridescent necks.[23] The tail was extremely long at 20–23 cm (8–9 in) and gray to blackish with a white edge.

Forested areas. Huge flocks would migrate through areas depending on weather conditions for nesting cycles. Deforestation for farmland and housing by European settlers is considered to be a major factor in their decline.

The Wiki page on the Passenger Pigeon is very informative! This specimen was viewed at The Moore Laboratory of Zoology at Occidental College. It is not an open museum, but a functioning laboratory. The Moore houses approximately 60,000 bird specimens. Most are from Mexico and the southwest. Most of the collection was put together before 1900, and it houses both extinct and rare species. http://college.oxy.edu/mlz/

Thanks for showing this however sad the bigger picture is.

I didn't want to confuse people by including a link, but I think that they may have flown similarly to starlings. After all, they're described as highly social, always flocked, and keeping large numbers in their groups.

That said, I'm making a recommendation that people visit YouTube and search "starling murmuration" ("murmuration" is the collective noun for a flock of starlings) for several visual treats! I really do think it's the closest you can come to picturing what they might have looked like in flight. Today pigeons keep much smaller flock sizes, but do loop and whorl when on the wing.

What an amazing bird, I only wish I was alive back then to see the flocks of these flying around, that had to have been an awesome sight!

Thank you so much for sharing, the information here is wonderful, and it gives a look at both past and present ecological situations. It's a reminder that we are stewards of the land, and need to take more care in how we live, react, and handle ourselves when it comes to the natural world!