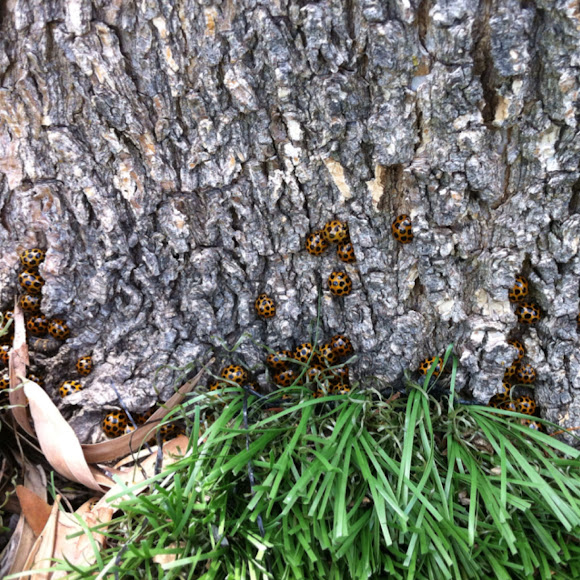 Description: The Common Spotted Ladybird Beetles are medium in size. They are beautifully bright orange in colour with 23 black dots on its wing-covers. Feeding: Both ladybird adults and larvae are predators. They feed on very small insects such as aphids, scale insects and mite. Both adults and larvae can be found on the same plants feeding on preys. They also consume flower nectar and water, sometimes they feed on honeydew from aphids as supplement. A fully grown larva consumes about 50 aphids per day. An adult female eats more than 100 aphids before she is ready to lay eggs. A ladybird will consume at least 2400 aphids during her life-span, about one to two months. Reproducing: Female is about the same size , or a bit larger than the male. After mating, the female lay a batch of eggs on the surface of leave. Their eggs are yellow in colour. Eggs and Larva: There are four stages of larval life. Each stage is separated by a moulting period. In moulting period the larva casts off its old skin, or exoskeleton, and grows a new one with increase in size. After the next instars comes out from the old cuticle, it will wait for the new cuticle to harden and then walks away. Common Spotted Ladybird Larvae is dull black in colour. The 1st instars looks like an ant. It walks as fast as ants. The later instars has two yellow bends on the abdomen. They spend most of the time feeding on aphids. Most other insect larvae consume their own eggs shells when hatched, as their first meal. The ladybird larvae seem do not do that. We also found that ladybird larvae do not eat their moulted skin in all instars stage. It takes four instars stages for a ladybird larvae become fully grown and ready for pupating. Their length is up to12mm. For locomotion, beside their six legs, ladybirds larvae use their crochet for moving. Their crochet is at the tip of their abdomen, which can hold onto a surface, help them for walking from leaf to leaf. Besides, the crochet hold so that their legs are free to catch the aphids. The crochet also hold the surface when in pupation. In the last instars stage, the larvae keeps on eating and becomes fat. Before pupating, the larvae finds a suitable place, which is usually a leaf surface near the stem tip. Then the larvae stays there and rest for a day, then start the last moulting. Pupa: After the last moulting, it becomes a pupa. The Common Spotted Ladybirds take about 8 days form pupa to adult. When it emerges Its hind wings will still be damp and will remain behind the wing-coves. The patterns on the forewings will appear a few hours after emerging.

Jacaranda mimosifolia in my front yard

At the time the pictures were taken the temp was 31 degrees projected to reach 40. All the Ladybirds from all over the tree (a Jacaranda mimosifolia) have made their way to the base of the tree, probably hundreds, in most stages of growth! Including some in the pictures newly emerged! Species information came from: http://www.brisbaneinsects.com/brisbane_...

Oddly enough this is exactly where the Aphids want to be, they choose the tree over the Rose any day! The tree (when budding) is almost black on its extremities from the amount of Aphids that gather on it!

Wouldn't want to be an aphid around there.