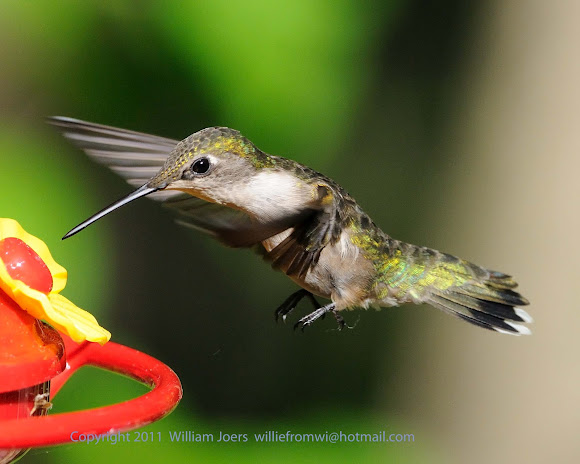 The Ruby-throated Hummingbird is 7–9 cm (2.8–3.5 in) long and has a 8–11 cm (3.1–4.3 in) wingspan. Weight can range from 2 to 6 g (0.071 to 0.21 oz), with males averaging 3.4 g (0.12 oz) against the slightly larger female which averages 3.8 g (0.13 oz).[2][3] Adults are metallic green above and greyish white below, with near-black wings. Their bill is long, straight and very slender. The adult male has a ruby red throat patch which may appear black in some lighting, and a dark forked tail. The female has a dark rounded tail with white tips and generally no throat patch, though she may sometimes have a light or whitish throat patch. The male is smaller than the female, and has a slightly shorter beak. A molt of feathers occurs once a year, and begins during the autumn migration.

The breeding habitat is throughout most of eastern North America and the Canadian prairies, in deciduous and pine forests and forest edges, orchards, and gardens. The female builds a nest in a protected location in a shrub or a tree. The Ruby-throated Hummingbird is migratory spending most of the winter in southern Mexico, Central America as far south as South America, and the West Indies. It breeds throughout the eastern United States, east of the 100th meridian, and in southern Canada in eastern and mixed deciduous forest.[5] seen mostly in winter, in Mexico.

In the forth and fifth photo we have a male. Both are the same bird, and were taken seconds apart. Please notice that the Ruby red throat is more visible when he turns his throat into the sun, and it appears dark to mostly black when it is not at the proper angle. More times then not, the males throat will appear to be dark or black when you spot them.

New notes just added to help show the males throat appearing red when turned into the sun, and black when its head is turned ever so slightly away from the sun.

Thank you Chief RedEarth and MayraSpringmann

CarolSnowMilne, I am thrilled I could share these with you and the worldwide ProjectNoah family.

Thank you evenlake, I had heard hummingbirds in my yard for a few days now, I finally got a spotting of them, and will probably be putting up photos from that spotting in a day or two.

Thanks for the glowing comments, Naturesrealm

Thank you so much for taking the time to comment on my spotting Adarsha.Joisa. I am thrilled I can share them with you and others, and am very happy you like them.

http://www.projectnoah.org/spottings/601...
this is the Annas we have here. They are very abundant and as you can see the color of the gorget is probably the main difference.

Thanks for sharing your precious pics. I love hummingbirds and these are simply adorable.
We have the Annas Hummingbirds on the west coast. They are quite similar.
I love the Ruby red in your spotting.
WE have migratory Rufous hummingbirds which are truly stunning. They are truly wild and quite difficult to get a picture of. i had one at the feeder and I will always cherish that moment ,along with the feeder!!

The most gorgeous photos of hummingbirds I have ever seen. Wonderful!