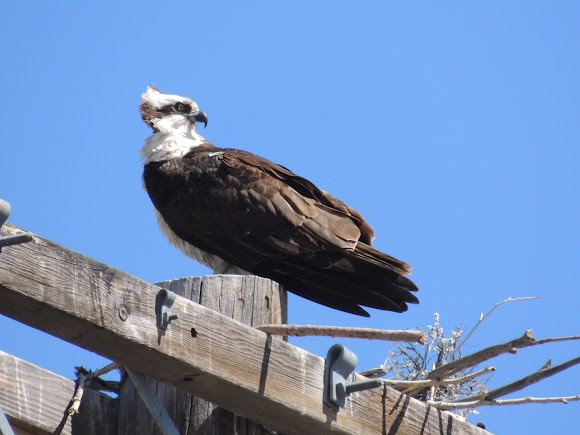 The Osprey is 0.9–2.1 kg (2.0–4.6 lb) in weight and 50–66 cm (20–26 in) with a 127–180 cm (50–71 in) wingspan. The subspecies are fairly close in size, with the nominate subspecies averaging 1.53 kg (3.4 lb), P. h. carolinensis averaging 1.7 kg (3.7 lb) and P. h. cristatus averaging 1.25 kg (2.8 lb). The wing chord measures 38 to 52 cm (15 to 20 in), the tail measures 16.5 to 24 cm (6.5 to 9.4 in) and the tarsus is 5.2–6.6 cm (2.0–2.6 in).[19][20] The upperparts are a deep, glossy brown, while the breast is white and sometimes streaked with brown, and the underparts are pure white. The head is white with a dark mask across the eyes, reaching to the sides of the neck.[21] The irises of the eyes are golden to brown, and the transparent nictitating membrane is pale blue. The bill is black, with a blue cere, and the feet are white with black talons.[6] A short tail and long, narrow wings with four long, finger-like feathers, and a shorter fifth, give it a very distinctive appearance.[22] The sexes appear fairly similar, but the adult male can be distinguished from the female by its slimmer body and narrower wings. The breast band of the male is also weaker than that of the female, or is non-existent, and the underwing coverts of the male are more uniformly pale. It is straightforward to determine the sex in a breeding pair, but harder with individual birds.[22] The juvenile Osprey may be identified by buff fringes to the plumage of the upperparts, a buff tone to the underparts, and streaked feathers on the head. During spring, barring on the underwings and flight feathers is a better indicator of a young bird, due to wear on the upperparts.[21] In flight, the Osprey has arched wings and drooping "hands", giving it a gull-like appearance. The call is a series of sharp whistles, described as cheep, cheep or yewk, yewk. If disturbed by activity near the nest, the call is a frenzied cheereek!

The Osprey has a worldwide distribution and is found in temperate and tropical regions of all continents except Antarctica. In North America it breeds from Alaska and Newfoundland south to the Gulf Coast and Florida, wintering further south from the southern United States through to Argentina.[24] It is found in summer throughout Europe north into Scandinavia and Scotland, though not Iceland, and winters in North Africa.[25] In Australia it is mainly sedentary and found patchily around the coastline, though it is a non-breeding visitor to eastern Victoria and Tasmania.[26] There is a 1000 km gap, corresponding with the coast of the Nullarbor Plain, between its westernmost breeding site in South Australia and the nearest breeding sites to the west in Western Australia.[27] In the islands of the Pacific it is found in the Bismarck Islands, Solomon Islands and New Caledonia, and fossil remains of adults and juveniles have been found in Tonga, where it probably was wiped out by arriving humans.[28] It is possible it may once have ranged across Vanuatu and Fiji as well. It is an uncommon to fairly common winter visitor to all parts of South Asia,[29] and Southeast Asia from Myanmar through to Indochina and southern China, Indonesia, Malaysia and the Philippines.[30]

Cindy, thank you for help, will try to reload it.

Hello, I moved the first image to last since it didn't upload correctly. That way an image is visible for this spotting of a beautiful Osprey! You can edit and reload that image any time.

Nice spotting! Your first photo didn't seem to upload properly; could you please reload it and also mention where you saw the bird? Welcome to Project Noah!