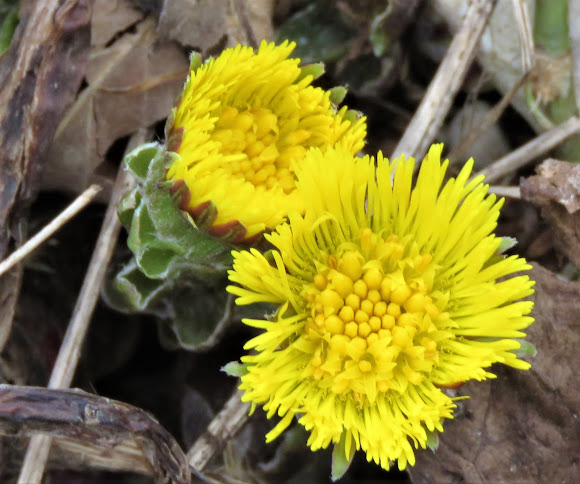 Coltsfoot is a herbaceous perennial producing bright yellow flowers typical from Daisy family (Asteraceae); on a scales-covered stem early in spring. The rosette of real leaves will follow afterwards. Observed growing in colonies, often as a massif.

Observed on a mound of discarded dirt and gravel, sitting there for years probably, next to a path through broadleaved forest on lower slopes of Jura mountain range, Geneva lake valley. Otherwise, this is a common Eurasian plant, most often growing in massifs in montane and alpine grasslands.

The plant was considered so useful as medicinal herb and as a food, that it seems to have been imported by colons to the New World. Flowerbuds and leaves were in traditional use, as a remedy, for bronchitis, lung cancer, emphysema, inflammation, rheumatism, swelling and water retention, and tuberculosis. I'm finding also reports on edibility of flower buds and young leaves; but also on their potential toxicity... Interesting thing is that its ashes (leaves were dried and burnt) were used as salt replacement or condiment - I wonder how did the people come up with that one.