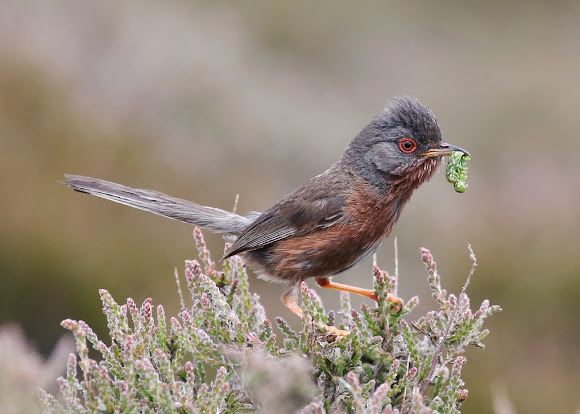 A small, long tailed warbler. from a distance these birds look dark and very plain which blends well with their natural environment. However, close up the colours really show. The upper surfaces are a dark slate blue with the throat, breast and belly a dark plum red. They also have small white spots on the throat. Legs are a buttery yellow and they have a red eye ring. These birds were feeding fledged chicks so are looking a little worn.

Lowland heath with large areas of dense heather and gorse. In the UK these birds do not migrate, so over winter. This means that they are very susceptible to the cold and need dense cover to shelter in during the colder months. Also they are entirely insectivorous so if there food freezes and die so do they. These birds were observed on Studland Heath in the south of England. Food appeared to be plentiful with each adult bird collecting prey items (mainly caterpillars) every few minutes.

This species is still Amber listed in the UK but is doing alright and has recovered from just a few pairs in the 1960's when several harsh winters decimated the population, to a few thousand today.

Thank you Jim for your great comment. As I am sure you know, getting some of these images is not always as easy as it might look and it means a lot that they are appreciated.

Thank you Sunny. They are very engaging little birds.

Thank you Polilla, Luis and Hema for your comments.

Thank you Ashley for the SOTD. Great to share these special little birds with you guys.

Congrats, this beautiful warbler has been selected as Spotting of the Day!