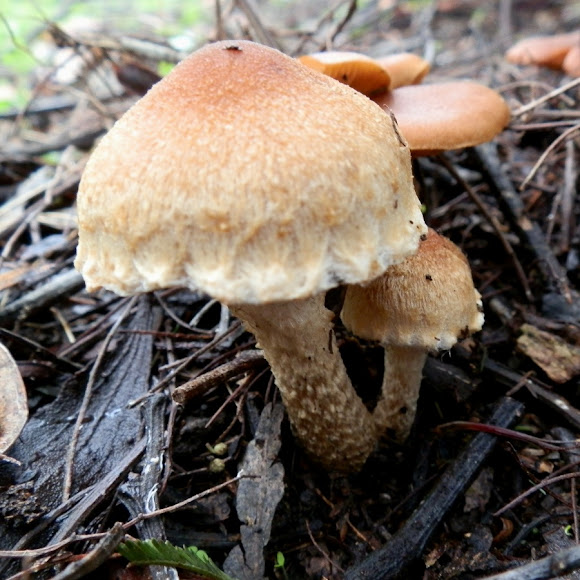 A clump of mushrooms with broadly convex, umbonate caps the widest was about 35mm across. These pale brown caps were "furry", granulose and had deep brown slightly flattened centres.The cap margins were fringed but intact probably because they were still young. The stipe was cream coloured and plain down to a wispy ring, it then became "squamulose" or covered with minute scales all the way to the base. Gills looked a brown colour, forked but they appeared to have a sooty look to them. There were also beads of pale blue liquid droplets on the gills ( pics # 4 &5)

Growing in wood chip mulch and below eucalyptus trees, in a nature reserve http://bie.ala.org.au/species/Lacrymaria...

Thanks to TheMiesMeister for helping with the identification of this Genus. The term lacrymaria refers to the droplets of moisture "lacrima =tear". L. asperospora has been documented in the Dandenong Ranges. I am lucky to have found these mushrooms with the droplets still fresh !! A similar species L.lacrymabunda ( weeping widow) is said to be found in Australia but I am not able to find an adequate reference for this. Also called Psathyrella asperospora

Hi Leuba, you are very welcome. I'm not familiar with the Australian fungi, so I thank you for adding another Lacrymaria species to my (unwritten) encycolpedia of mushrooms! It is great to expand knowledge of mushrooms from all over the world via this project! I am glad I can help you id this wonderful mushie.

TheMiesMeister, Thank you very much for helping identify this genus for me. I accept your identification and will amend my spotting accordingly. the only thing is I am not able to confirm the species lacrymabunda here is Australia but there is a "asperospora" which has similar characteristics as my spotting and a black spore print and hey have been spotted in the same area as this spotting-hence I will go with this. Younger caps appear "furrier". thanks again. I do like the photos of the droplets - guess, I was very lucky !

Hey! I think you might have found Lacrymaria lacrymabunda, the Weeping Widow. C. amianthinum has a granulate stipe and cap (when dry), clear white gills and sporeprint. I sadly can't find a good picture of L. lacrymabunda to give reference material, but what is so recognizable about this mushroom, are the waterdroplets on the edge of the gills. As a fact 'lacryma' means tear. And the furry caps and stalks are also good recognitionpoints. Fantastic pictures, though!