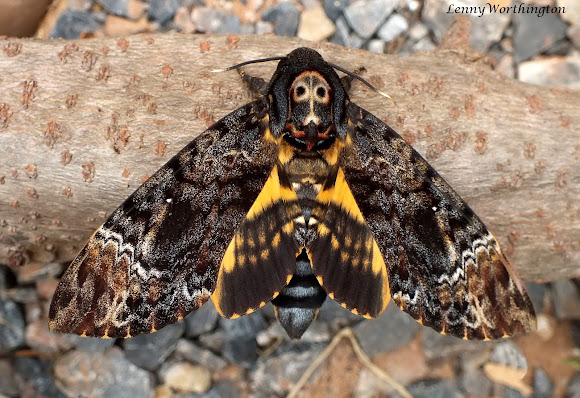 Acherontia lachesis is a Sphingid moth found in Asia, one of the three species of Death's-head Hawkmoth, also known as the Bee Robber. It is very fond of honey and bee keepers have reported to have found dead moths in their hives as a result of bee stings. They can mimic the scent of bees so that they can enter a hive unharmed to get honey (Wikipedia)

Thanks Lenny for the praise. All 99% of my moth photos, 75% of bugs, 25% of butterflies are with my dear Samsung Galaxy S3! Don't believe? But one needs to use some simple techniques (learnt by trial and error). For dorsal profiles I keep the phone camera on a small steady box - 10 cm tall, set on Macro, self-timer, set ISO 100-200, use some side-lightings (flash is not good for night shots, they cause harsh shadows/colour casts). For side and front profiles: hold camera steady supported on the wall or floor, use flash. For butterflies: Locate the butterfly on the camera, cover your face with it, slowly reach it, click with flash (even under bright sunshine). Yes, occasionally, I take out my Canon 50D with 100mm/2.8 IS USM Macro (e.g. Pyralid Moth), and rarely use extension tubes (for e.g. Longhorn Beetle). But, for moths I swear by my Galaxy S3!!! Good luck.

Thank you DrNamgyalT.Sherpa
I've been looking at your moths. Very sharp. May I ask which camera and lens you are using.