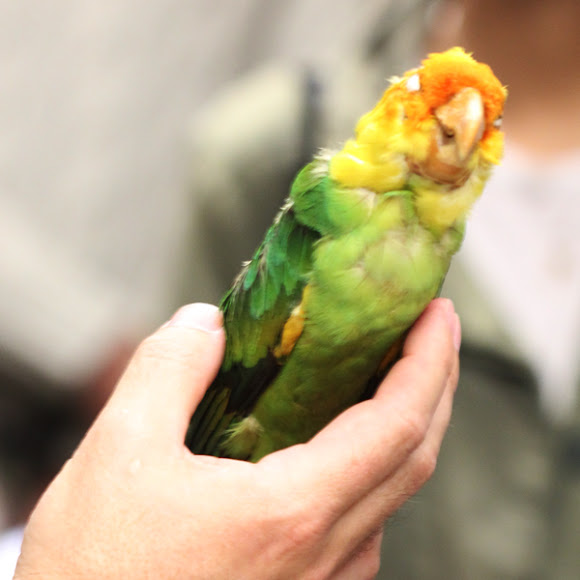 Now extinct (1904 wild, 1918 captive), this was the only native parrot in the eastern United States. The Carolina parakeet was a small parrot about 12 inches long that weighed about 10 ounces. According to Imhof, it resembled the mourning dove (Zenaida macroura) in shape, size and long tail. This native parrot was splendidly colorful as its body was bright green crowned with a yellow head and an orange face and bill. A small patch of yellow was on its wings.

These birds were probably victims of many factors. Human expansion reduced terrain and the interest in decoration created a trade. They were also kept as pets. As flocking birds, they would return to sites where they had just been shot at. Combining those factors with disease was simply too much for the species. This specimen was viewed at The Moore Laboratory of Zoology at Occidental College. The Moore houses approximately 60,000 bird specimens. Most are from Mexico and the southwest. Most of the collection was put together before 1900, and it houses both extinct and rare species. http://college.oxy.edu/mlz/

Thanks for showing this even if it's gone now.

Again you have given us a wonderful example of days gone by, and a great education in what has been, what is today, and what could be the fate of tomorrow!

Thank you so much for sharing!

It says on Wiki that there are only "About 720 skins and 16 skeletons are housed in museums around the world," so there aren't many chances to see one! I provided the Wikilink and a link to a site called "Outdoor Alablama" that were both very good about providing a lot of background on the bird! Such a beautiful thing :)

I got all excited at first that you had found one :) ! I have a cabin in North Carolina in a city that was once called Eastatoe...the Native American name for the Carolina Parakeet. I've seen illustrations but never a "mummy"...thanks!