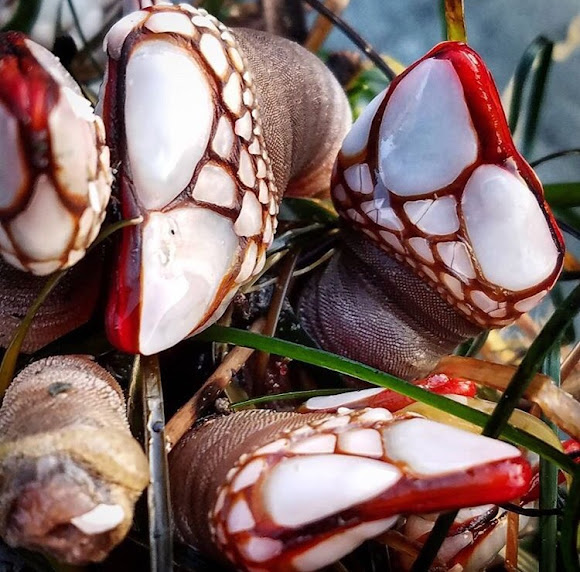 Commonly known as the gooseneck barnacle or leaf barnacle, is a species of stalked barnacle. It is found, often in great numbers, on rocky shores on the Pacific coasts of North America. Pollicipes polymerus is a hermaphrodite. Reproduction takes place during the summer and there may be several broods per year. The ovaries are in the upper part of the peduncle and liberate from 104,000 to 240,000 eggs at a time into the mantle cavity. Here they stick together to form egg masses. The numerous small testes lie alongside the gut. Sperm from these is passed along the extensible penis into the mantle cavity of an adjoining individual where fertilisation takes place. Self-fertilisation does not seem to occur and any individual that is more than 20 cm (8 in) from its nearest neighbour is effectively sterile.[7] The eggs are brooded for 3 to 4 weeks until they hatch into nauplius larvae and are liberated into the sea.[8] There they become planktonic and feed on phytoplankton. They grow and undergo 6 moults in about 40 days before becoming non-feeding cyprid larvae. These search out suitable places to settle where they undergo metamorphosis and attach themselves permanently to the substrate. They do this by secreting a strong adhesive substance from glands on the antennules. Settlement is stimulated by the presence of peduncles of other gooseneck barnacles, and may take place on the peduncles themselves.[7]

Grows on anything in the sea, I've found them on a huge block of styrofoam

Edible Gooseneck barnacles, also called percebes, are crustaceans that cling to rocks in places that have a strong crashing surf. In Spain and Portugal, they’re considered a rare and wonderful delicacy, thanks to their sweet flesh, which tastes a bit like a cross between lobster and clam. In Europe, a single kilo of percebes can fetch almost $500. Their Canadian counterparts, (the kind we are most likely to see in Crescent City) which are hand-picked off the coast of Vancouver Island by the Nuu-chah-nulth First Nation, cost over $20 per pound—if you can get your hands on them at all, which regular consumers generally can’t. Luckily, some of Toronto’s best restaurants are doing wonderful things with these odd-looking shellfish. You’ll want to hurry, though: percebes are only in season until the end of May, and once they’re gone, they’re gone.

Oh! Thank you I'll move it!

Wow! Great shots! I love the vivid colors. This should be moved to the arthropods category :) Most people don't know these are actually crustaceans.