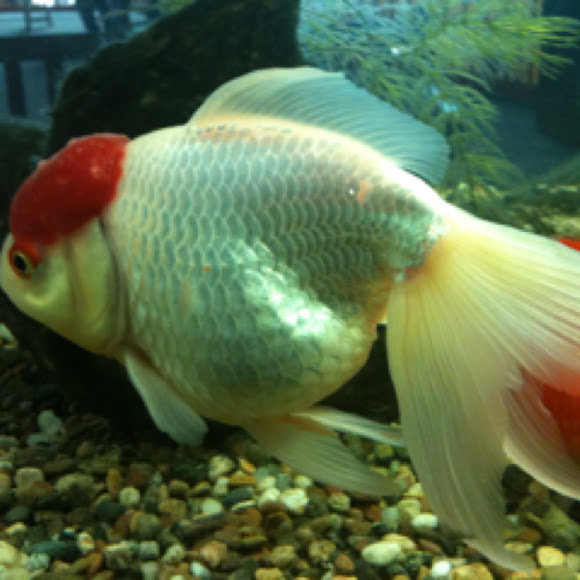 Probably the most well known of the exotic goldfish, Orandas are very common in both America and the far east. They first appeared in the 1500s, and were likely the first goldfish breed to develop wen (headgrowth). Orandas normally top out at around 8 to 10 inches, though there is one recorded Oranda in china (named after Bruce Lee) that has been measured at 15 Redcap Orandas are not just white Orandas with Tancho coloration; they have headgrowth predominantly on the top of the head, with little or no Wen elsewhere. "Redcap" orandas with full hoods are simply Tancho colored Orandas. They should be completely white except red colored wen on top of their heads (the more circular the pattern, the better). Combined with their wen, it gives the appearance of an exposed brain. Redcap orandas are very popular in America, and high quality specimens are available even in chain stores. Although is it impossible to sex Goldfish when they are young and not in breeding season, the male is usually smaller and more slender that the female. In the breeding season the male has white prickles, called breeding tubercles, on its gill covers and head. Seen from above the female will have a fatter appearance as she is carrying eggs.

Orandas are not especially delicate, but are not as hardy as Common goldfish. They are not really suitable for ponds and should be kept in heated aquariums.

Goldfish are very social animals and thrive in a community. Not only are they a great community fish but they are great scavengers as well. It is really not necessary to add other scavengers or other bottom feeders to the aquarium when you have goldfish. The Oranda Goldfish is not a fast swimmer. They cannot vigorously compete for food with fast swimming types of goldfish like the the Common Goldfish, Comet Goldfish, the Shubunkin, so may not fare well if housed with them, but they will do well housed with other egg-shaped varieties if the environment is well cared for. Lifespan: 20 years Aquarium Hardiness: Very Hardy - The Wen is prone to infection, if the aquarist notices any rawness or irritation it is wise to treat right away. Aquarist Experience Level: Beginner

Oh...didn't even think of placing this under pets lol. Thank you XD

Great information Leah!
I've moved this to pets for you.