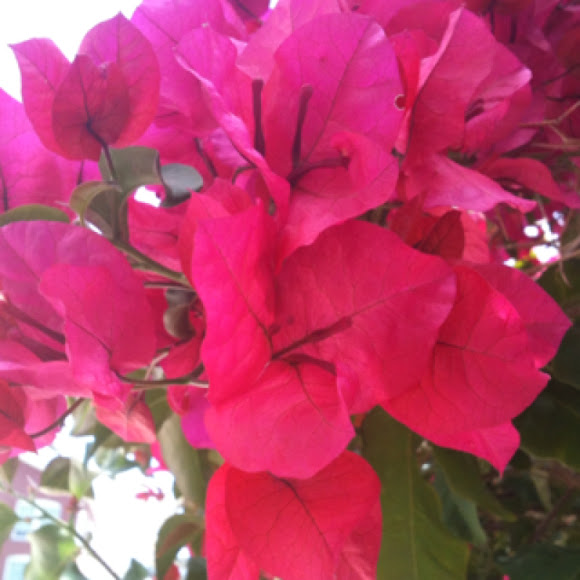 Native to South America, The first species recorded in the Philippines was Bougainvillea spectabilis. The other species, B. glabra and B. peruviana were introduced much later. The cultivated hybrids have produced a considerable variety in size, color, form and numbers of showy bracts. The genus is derives its name from Antoiine de Bougainville, first Frenchman to cross the Pacific. Bougainvillea are evergreen desert woody vines that flower several times throughout the year. A member of the Four O-clock family, it is also fragrant, resembling the scent of the Honeysuckle bush. The most common colors of bougainvillea that you'll see in the Phoenix area are magenta, purple, pink and red. The bougainvillea would like a little shade during the day, but it will be fine in full sun. Bougainvillea plants can be trained into various shapes. They can be used as vines, shaped into bushes, into ground cover, or just let to grow wild. Of all the desert plants I recommend, bougainvillea is the one that is most sensitive to frost, and there will be times during the winter when you should cover your bougainvillea with a light cloth or sheet. Even if the bougainvillea plant dies in the frost, it will probably come back after the winter if it is pruned, but it looks pretty ugly when it is frost damaged until that time.

Properties - Leaves considered to have antiinflammatory activity. - Considered anti-diabetic, antibacterial. - Pinitol considered antidiabetic. Parts utilized Leaves, stems, flowers Uses Folkloric - Not known in the Philippines for any medicinal use. - Traditional practitioners in Mandsaur use the leaves for a variety of disorders, for diarrhea, and to reduce stomach acidity. - Used for cough and sore throat. - For blood vessels and leucorrhea: a decoction of dried flowers, 10 g in 4 glasses of water. - For hepatitis, a decoction of dried stems, 10 g in 4 glasses of water. - In Panama, an infusion of the flowers of B. glabra used as treatment for low blood pressure. - Nupe people of Niger use a crude extract of leaves for diabetes.