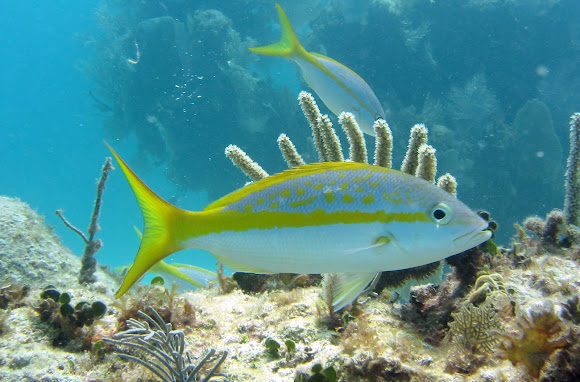 Photo take at -40 ft on a coral reef, this is a common snapper likes to hang in groups around the sand areas looking for food. Back and upper sides olive to bluish with yellow spots; lower sides and belly with alternating narrow, longitudinal pink and yellow stripes; prominent midlateral yellow stripe begins at mouth and runs to tail, broadening as it passes the dorsal fins; caudal fin yellow and deeply forked; no dark lateral spot.

Found on coral reef and sandy areas abundant species found along the North American coast of the Atlantic Ocean. Although they have been found as far north as Massachusetts, their normal range is along Florida down through the West Indies and Brazil. Wikipedia.

Thanks Kei i have a canon eos T2i whit a 50 mm lens, i don´t use strobes on my photos it can damage the aquatic life so i use red filters.

Awesome photo!! What camera did you use?

Ha! I thought the ocean life in the back was part of the fish when I saw it in the thumbnails!

Thanks Maria haha yes actually many fish has it:)

Beautiful - in the first photo, it almost looks like the fish is sporting a mohawk hairstyle!