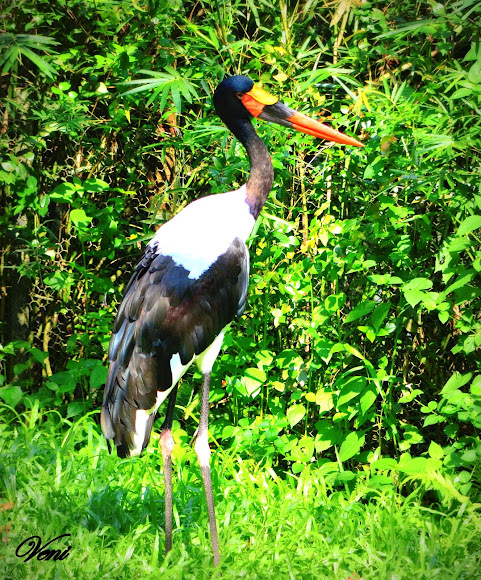 The Saddle-billed Stork (Ephippiorhynchus senegalensis) is a large wading bird in the stork family, Ciconiidae. It is spectacularly plumaged, identical in male and female when perched but the female shows much more white in the primaries in flight. The head, neck, back, wings, and tail are iridescent black, with the rest of the body and the primary flight feathers being white. Juveniles are browner grey in plumage. The massive bill is red with a black band and a yellow frontal shield (the “saddle”). The legs and feet are black with pink knees. On the chest is a bare red patch of skin, whose colour darkens during breeding season.

It is a widespread species which is a resident breeder in sub-Saharan Africa from Sudan, Ethiopia and Kenya south to South Africa, and in The Gambia, Senegal, Côte d'Ivoire and Chad in west Africa.