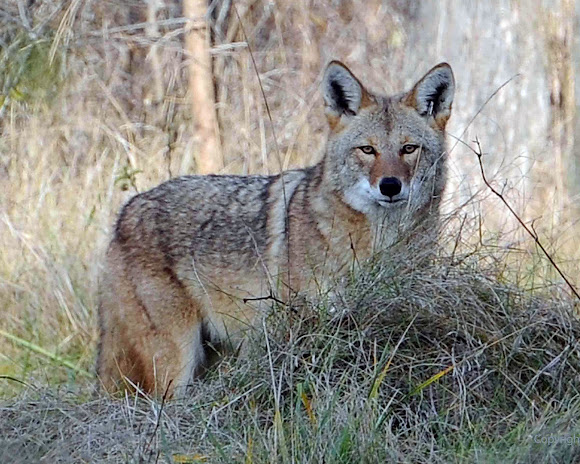 ries from grayish-brown to yellowish-gray on the upper parts, while the throat and belly tend to have a buff or white color. The forelegs, sides of the head, muzzle and paws are reddish-brown. The back has tawny-colored underfur and long, black-tipped guard hairs that form a black dorsal stripe and a dark cross on the shoulder area. The black-tipped tail has a scent gland located on its dorsal base. Coyotes shed once a year, beginning in May with light hair loss, ending in July after heavy shedding. The ears are proportionately large in relation to the head, while the feet are relatively small in relation to the rest of the body.[3] Certain experts have noted the shape of a domestic dog's brain case is closer to the coyote's in shape than that of a wolf's. Mountain-dwelling coyotes tend to be dark-furred, while desert coyotes tend to be more light brown in color.[4] Coyotes typically grow to 30–34 in (76–86 cm) in length, not counting a tail of 12–16 in (30–41 cm), stand about 23–26 in (58–66 cm) at the shoulder and, on average, weigh from 15–46 lb (6.8–21 kg) Northern coyotes are typically larger than southern subspecies, with the largest coyotes on record weighing in at almost 75 pounds (34 kg) and measuring 1.75 m (5.7 ft) in total length.

Highly adaptive, and able to live in and around humans, without being detected as often as one might think.

While out on a morning hike in Havenwoods State Park, an urban State Park located in the middle of the northern side of Milwaukee ( A rather large and urban city) I happened upon this coyote, we had a stare down, while I slowly moved my camera up to make this capture. I got this rather nice capture, before it ran off into the brush. I had been there to hike and look for white tailed deer that I knew were in the area. This was a thrilling bonus.

Gracie-O, I spent 40 minutes tonight helping Shauming Lo come up with an Id for a moth tonight. He is someone I call a friend here on PN. I do not know him, will probably never have the honor to ever meet him, but I did it because I wanted to be a blessing, and enjoyed doing the research. By the way, the spotting he posted today is a first of that sub species on PN. it can be found by following this link http://www.projectnoah.org/spottings/123...

they are small things, I will admit, but those are a few ways I can leave less of a foot print, Gracie-O

Thanks for the kind words Brian Parsons

Eco Friendly stuff? I would need to know exactly what you mean by that. I would rather be in a canoe or kayak then a motor boat, I would rather ride my bike then own a motor cycle. I would rather hike, or be in the outdoors, doing most anything, rather then going to a baseball game, or a football game. Do I qualify in your mind?

fire me off an email please Gracie-O and I will do my best to give you some ideas, and even some suggested reading. Always willing to help where I can.

WOW Gracie-O, Thanks for finding that and sharing it with me, if I am to become a Noah Ranger, it will be by means of being nominated. I already do many of the things necessary to be a Ranger, to be honest. I will continue to suggest Ids, welcome new people and leave comments for others whether or not I am a Noah Ranger, or not. It is just part of who I am.

Gracie-O, my email address is on my profile page, if your interested in getting a few pointers and tips, feel free to email me. I would suggest you tell me a bit about your camera, and how long you have been doing photography, as well as your understanding of things such as aperture ( f stop), shutter speeds, ISO, histograms and highlights. Be honest, and I should be able to move you along to the next level. May you be blessed with some wonderful spottings, and I look forward to finding an email from you in my inbox in the not to distant future.

Thanks Gracie-O. I am rather new to Project Noah, I am still learning my way around here. I am deeply honored that you feel so strongly about my photos and my love for wildlife. I have no idea, what is all expected of a Noah Ranger, or how one becomes one. If I were ever asked, I would have to make sure, I could commit myself to that task, for I would want to be one of the best Rangers there are. I am a pocket perfectionist, and a job like that would be one, I would be driven to do my absolute best at. I would need to know how much time was expected of me, before I would consider adding more to a plate that is already moderately full. I am the same way when it comes to photography, although I have a long ways to go before I feel I have arrived, I am driven to do better and to not settle for anything but the best I can give.

Big and running wild and free in the City of Milwaukee too, Now that is really Cool!!

dats a big one!

Thank you so much SatyenMehta

Thanks DonnaPomeroy, yes this coyote, sure was a very healthy and well fed specimen. I would say he had adapted well to his habitat in the city of Milwaukee.

That is one beautiful coyote. The coyotes out west are much leaner and have sparser coats. Also lack the gray that yours has. Your coyote wins the beauty contest!

Wonderful spotting Willi... Its look very healthy one and grown dense hairy coat and look so adorable. And look into eyes is so captivating...