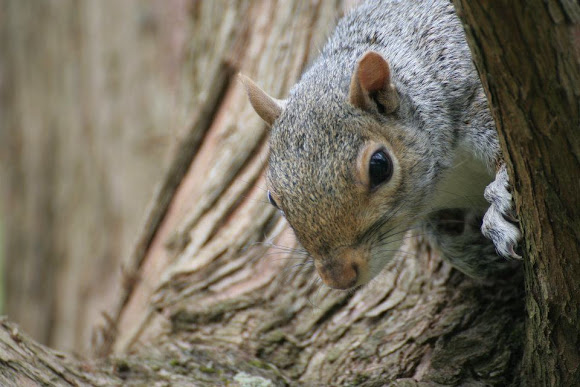 The eastern gray squirrel or grey squirrel (depending on region) (Sciurus carolinensis), is a tree squirrel in the genus Sciurus native to the eastern and midwestern United States, and to the southerly portions of the eastern provinces of Canada. A prolific and adaptable species, the eastern gray squirrel has been introduced to, and thrives, in several regions of the western United States. It has also been introduced to Britain, where it has spread across the country and has largely displaced the native red squirrel, Sciurus vulgaris. In Ireland, the red squirrel has been displaced in several eastern counties, though it still remains common in the south and west of the country. There are concerns that such displacement might happen in Italy and that gray squirrels might spread from Italy to other parts of mainland Europe.

I know, this is "the bad Squirrel", especially in the UK. But this one was nonetheless very cute and confiding, so we just had to take pictures of it.. ;) On the last picture you can see how close it was to me.. I would have been able to touch it, but i guess it would have mistaken my fingers for food and i know how painful rodents can bite.. :) The animals aren't even responsible for being in the UK, that is the guilt of the people that released them there.

Wow, i feel honoured! Nice blog, i enjoyed learning about the invasive species!

Brinschk, your spotting is featured in the Project Noah blog today. http://blog.projectnoah.org/post/4486700...

Thank you all for your comments.. it was very easy to get that close, in fact the sqiurrel came down the tree as we stopped to look at it and made some squirrel-like sounds.. I will add another picture where you can see how close it was to me, while my boyfriend took the pics.. :-)

How did you get so close to that squirrel?

Great series and information! They are so cute.