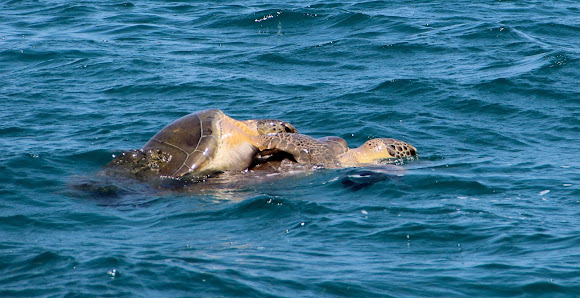 Two Green Sea Turtles mating. Green sea turtles mating is similar to other marine turtles. Female turtles control the process. A few populations practice polyandry, although this does not seem to benefit hatchlings. After mating in the water, the female moves above the beach's high tide line, where she digs a hole with her hind flippers and deposits her eggs. Clutch size depends on the age of the female and species, but can range between 100 and 200. She then covers the nest with sand and returns to the sea.

Found in the waters off the South coast of Antigua.

I was told by locals that it is very rare to see them mating and that when they mate they remain attached one to the other for many days.