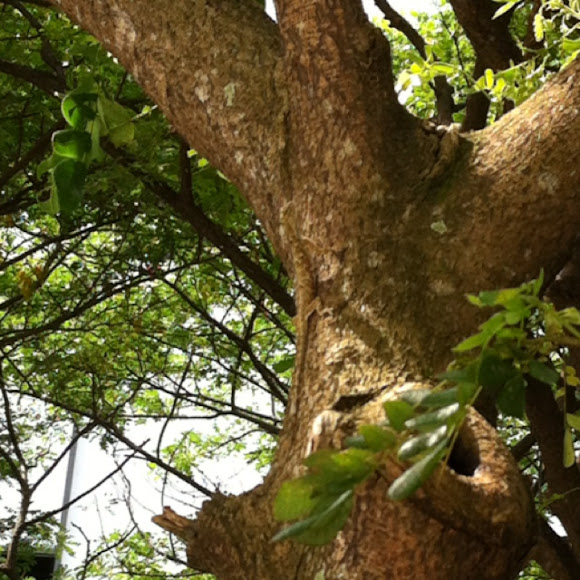 A lizard with elongated ribs and skin flaps on the sides of its body. When opened, these skin flaps allow it to glide between tree trunks. It is primarily a tree dweller, except that the females come down to the forest floor to lay eggs. The body length is of about 9 cm, with a slightly longer tail. The body is of a dark grey/brown colouration with stripes and patterns to help it camouflage against the tree trunks. The males have a yellow triangular flap of skin under the chin, the gular fold, which is used to communicate with other lizards, mostly for mating. Females have a much smaller and blue flap. They feed on small insects.

Ranges from southern Thailand, Peninsular Malaysia and Singapore to Sumatra and Borneo (including the adjacent Philippine island of Palawan) http://www.ecologyasia.com/verts/lizards...

yup was trying to capture image of the lizard from a far.

So it's a Draco

nice camouflage ! - either a Draco sp ( flying lizard) or Calotes sp ( changeable lizard), I think. I like the tree - looks nice and shady...